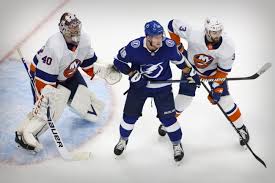 It’s been boring to watch after two games. The better team outplayed its opponent and won both games, and the better team deserved to be up 2-0 in the Eastern Conference Finals. That would be the Tampa Bay Lightning over the New York Islanders.

This series has a making of a sweep or a five-game series. It’s on the Islanders to make it interesting and make the Lightning sweat it out and earn the right to play in the Stanley Cup Finals. Right now, Islanders fans gladly settle for that. Expectations change after two games that did not go their team’s way.

It’s no fun being swept. The Hurricanes swept the Islanders in the second round. To end a successful season with another playoff sweep becomes bittersweet.

The Islanders are not better than the Lightning. Just look at the talent offensively. The Lightning boasts speedsters and shooters while the Islanders feature plumbers and grinders. Count on the Bolts to get a much-needed timely scoring anytime with the players they boast. The Islanders have to work for it, and sometimes it does not work out.

Still, the Islanders are a better team to be swept. They should at least win two games. They have to find a way to get it done. It would be nice to know the Islanders will continue to be in the uptick heading to the offseason.

A win in Game 3 would be a nice way to start. If the Islanders can’t get it done, the Lightning could sweep them.

We resorted to this now after thinking the Islanders can do big things against the Lightning. We thought with our heart rather than our heads. That’s no crime since anything can happen in the Stanley Cup Playoffs.

The Lightning deserves credit for playing the favorite part well by executing offensively and defensively. The Islanders need to play the role of an underdog by not backing down and finding a way to win. This means they can’t be a patsy this weekend.

It may mean the Islanders may have to do a lot more hitting and getting their point across. Whatever it takes to get that win.

The Islanders talk about having faith and believing in themselves. All good stuff, but actions matter in the name of results. Only a win can validate this talk. If not, it’s just cliches at best at this point.

The two losses took a life out of the Eastern Conference finals. With the NFL kicking off its season Thursday night with the defending Super Bowl champion Kansas City Chiefs celebrating a 34-20 victory over the Houston Texans, fans will focus on football, even though the Giants and Jets offer nothing to watch.

Only the Islanders can bring some life by winning. Maybe they don’t win the series, but at least they will make it interesting. Who knows? Maybe the Lightning loses momentum. Anything is possible.

All it takes is just one win, and it must come Friday night. The Islanders know this is a must-win game for them to even have a shot to win the series or even make the series interesting. Odds are better that the Lightning could sweep the Islanders than the Islanders taking it to five or six games.

The Lightning are on a mission. After last year’s flameout to the Columbus Blue Jackets in the playoffs, they are determined to put themselves in the position to participate in the Stanley Cup Final and win it. They don’t seem to let up at this point.

Maybe the Islanders are up against it.

But it wouldn’t hurt to dream and make it a reality just for one night like Friday night.