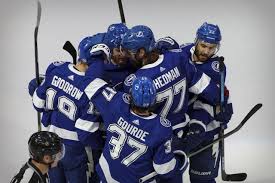 This was cruel. A horrible way to lose a game.

With 8.8 seconds to go in the third period and the Islanders bracing for overtime, Nikita Kucherov scored the game-winning goal that gave the Tampa Bay Lightning a 2-1 Game 2 victory over the Islanders and a 2-0 series lead in the Eastern Conference finals on Wednesday night at Rogers Place in Edmonton.

Lightning goaltender Andrei Vasilevskiy made 27 saves in this game. He stopped the Islanders cold in the second period when they peppered shots towards him.

Hockey wonks look at the Lightning as a finesse, offensive team. Don’t mistake that team for being soft. They can grind with the best of them. They did it against the Columbus Blue Jackets in the first round, and they did it in Game 2 against the Islanders. You can bet they can do it again in the conference finals. It’s no wonder why they are the favorite to win the Stanley Cup. That team is just a complete team that can win by scoring or defending or in this case for Game 2, both.

The Islanders scored a total of three goals against the Lightning in the first two games of the conference finals. That won’t cut it. If they can’t score more than two goals against that team, they could be hard-pressed to win the series.

The Islanders know they can’t get into a shootout with their Eastern Conference final counterpart. It’s a losing proposition. The Lightning boasts so many skilled scorers for the Islanders to keep up.

The Islanders slowed the game down in Game 2 to have a chance, but that went for naught. The Lightning matched the Islanders’ effort defensively, and when it was time for them to take a shot to score, they did just that. Victor Hedman rifled a shot to tie the game at 1 in the first period, and Kucherov skated and shot it, and that’s all she wrote in this game.

The Lightning can do timely scoring like the Islanders do, too.

Honestly, the Islanders can only do so much. It just could be they are running up against a better team. These two games symbolized that. They knew this was not going to be easy, and now they are in a bind that they may be hard-pressed to get over with. If the Lightning can win on offense and defense, what chance do the Islanders have realistically?

Wednesday night seemed like the beginning of the end for the plucky Islanders. Their offense failed to perform, and the Lightning don’t seem to be that scared of the Islanders. In fact, it’s easy to wonder if the Lightning even respect them.

If Mathew Barzal and Anthony Beauvillier can’t get it going, the Islanders don’t have a chance. So far, the Bolts kept them out of the scoresheet. This is troubling since those two are the Islanders’ best players. If the Lightning continues to make them look like toothless checkers, the Islanders may not win a game in this series.

Islanders head coach Barry Trotz tried to jumpstart the team by inserting Andrew Ladd and Leo Komarov in the lineup. Neither did much in this game not surprisingly. The move seemed more of desperation to change things up, which is what you want to see out of the coach to see if something works. Problem is Ladd’s best days are behind him.

The Islanders can do soul-searching. They could take a day off from the rink. They may change lines. They can say a prayer to a higher power. But is it going to matter in the end?

Unless the Lightning forgets to score or they lose it all of a sudden, this could be a fait accompli.

This weekend could be the Islanders’ swan song with the way it’s going.