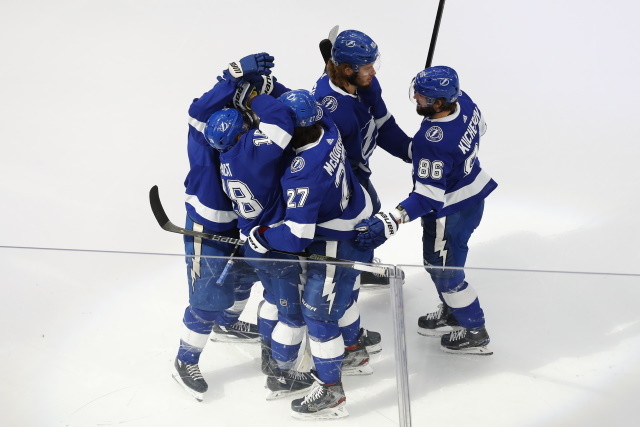 Defense represents the Islanders’ calling call. It dictates their success. If the Islanders play great defense, they are going to win 96% of the time.

The Islanders made the cut of making the playoffs by their defense not giving room for the Panthers to skate. The Islanders won their first two playoff rounds by stifling and suffocating the Washington Capitals and Philadelphia Flyers.

In the Eastern Conference finals, their defense faces a challenge in the Tampa Bay Lightning that has a DSL-like speed on the ice. The Lightning put on a show in Game 1 by scoring eight goals against the Islanders in their 8-2 victory on Monday night at Rogers Place in Edmonton.

Not only did the Lightning put on a show, but they sent a message to the Islanders. They dare the Islanders to stop them. They scored eight goals with a purpose. They won’t be intimidated by the Islanders defense. They believe offense can stop a great defense with speed and skill.

Barry Trotz and his coaching staff face that dilemma the minute after the Islanders beat the Flyers in Game 7 of the Eastern Conference semifinals on Saturday night at Scotiabank Arena in Toronto.

The Islanders can’t play any worse than they did on Monday night. But that may not matter if the Lightning can win a 3-2 or 4-3 or 2-1 goal.

The Islanders can make so many adjustments, but it may not matter if Victor Hedman, Nikita Kucherov, Brayden Point and Ondrej Palat rifled the puck from long distance to score. A good defense can only hold them for so long.

The Islanders can’t afford to get into a shootout with the Lightning. They will lose more often than not. They don’t have the firepower to keep up.

For the Islanders to win, they need to slow the game down and make the Lightning skate around and not create traffic. It may be feasible. It may be impossible. We will find out as this series goes along.

The Islanders need to find answers in Game 2. They have to find a way to slow this team down or else this could be a short series. There’s a reason hockey wonks pick the Lightning to win the series and win the Stanley Cup.
Whether they do it or not becomes the intriguing part of the series. It will be the only way the Islanders can win the series.

The Islanders can do it for one or two games, but they have to do it for four or five games to get a win. It remains to be seen if they can do it. It’s going to be hard.

The Islanders will have to dominate the puck a lot more than the Lightning for this defense not to work against the Lightning. That will be hard since the Lightning defense is better than people give credit for. People don’t talk about their defense since they are more known for their offense.

The Islanders don’t have that many bruisers that could wear the Lightning down, which could pose another problem. Anders Lee, Andy Greene and Scott Mayfield can do some hitting, but the Lightning won’t be intimidated by them that much. They will keep playing their game because they know they can score anytime and anywhere.

If the Lightning beat the Islanders, it will because they are too fast for their opponent and they can shoot the puck from a long distance. They can do that for seven games.

No one saId this was going to be easy for the Islanders.

This may be too much for them to bear.

A Game 2 win would validate themselves a chance to beat the Lightning. Plus, it would reinforce their belief that their defense can handle the challenge of shutting down the Lightning.

So much rides on them in the next game.

The Islanders can talk about there’s time all they want.

But they are not going to win three or four in a row with the Lightning winning three games.

At this point, the Islanders hope they can somehow survive and hope the Lightning make mistakes.