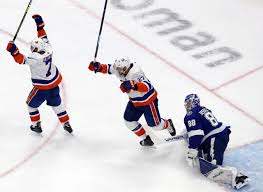 I admit the Islanders were done against the Tampa Bay Lightning after Game 2 of the Eastern Conference finals. I figured a Lightning sweep. I just hope the Islanders made this series interesting.

Well our never-say-die overachievers answered the challenge. They managed to make this a series by giving it their all to earn a 2-1 double overtime victory against the Lightning in Game 5 of the Eastern Conference finals on Tuesday night at Rogers Place in Edmonton, cutting their series deficit to 3-2 and keeping their season alive to play Game 6 Thursday night.

The Islanders sent a message they will be done when they say so, not when the critics, cynics, realists and experts say so.

One can make a case this win was the best Islanders postseason win of this postseason. The Islanders frustrated the Lightning defensively, especially in the overtimes. That’s not easy to do with the weapons the Lightning boasts. They grinded and slowed the game down. They checked every move the Lightning did. How about Leo Komarov stealing the puck? Or Anders Lee using his body to block shots? Or Scott Mayfield shadowing Nikita Kucherov to prevent him from scoring a game-winning goal in double overtime? Or Jean-Gabriel Pageau deflecting shots? Or Johnny Boychuk blocking six shots? Or Ryan Pulock blocking four shots?

To make it even better, Semyon Varlamov made saves after saves to give the Islanders a chance to win this game. To say this was his best moment of his goaltending career serves as an understatement.

An effort like that would have done an injustice if the Islanders lost this game. It would have meant a bitter ending to what was a great season with a tough loss and nothing to show for it. The Islanders deserved this victory, and the hockey gods shined on them for their valiant effort.

If the Islanders bow out in either Game 6 or 7, at least they have this game where they can be proud of. They stood their ground. They did everything they could to win a game. They did not call it a season. They played like they belonged in the Eastern Conference finals, and they played like they could be good enough to beat their opponent to advance to the Stanley Cup Final.

Who knew when the game would end? It seemed like it would have gone to triple overtime. The Islanders struggled to generate offense and create traffic. The Islanders defense put on the yeoman work until Jordan Eberle netted the game-winner by scoring on a 2-on-1 in double overtime.

The Islanders embraced Eberle in a wild celebration that featured Varlamov doing a slip-n-slide to join the fracas. They earned the right to do that after grinding it out, and considering Islanders coach Barry Trotz handed the Eastern Conference semifinals Game 7 assignment to Thomas Greiss, Varlamov deserved to enjoy a moment of this by playing well rather than pouting about Game 7.

Lightning head coach Jon Cooper shook this loss off by saying it took the stars aligning on a fanned shot for the Islanders to get the break they got. He referred to Lightning defenseman Kevin Shattenkirk fanning on a shot that had Lee retrieving the puck and skating with it before sending it to Eberle to score on a 2-on-1. Whatever.

If the Islanders take this to Game 7, Cooper and Lightning will be tight in a sense their playoff failures over the years will be remembered after blowing a 3-2 series lead in the conference final against the Pittsburgh Penguins (2016) and Washington Capitals (2018). This win puts pressure on the Bolts to finish the Islanders off on Thursday. Can they handle it? Yes, they survived adversity against a good Columbus Blue Jackets team in the first round, but the Islanders showed they are a different animal from the way they played in Game 5.

The Islanders may have surprised everyone and their own fans that this series is still going on, but they are not. They know how good they are, and they know they thrive when everything is on the line like now. Every elimination game will be the same as the one we saw in this game. So much twists and turns. So much anxiety. So much drama. So much adventure.

For the Islanders, they are ready for more. Their response indicates they don’t want to leave the bubble in Edmonton.

Do the Islanders have two more games like Game 5 in them? Will they run out of steam?

This series becomes interesting now because the Islanders provided a response.