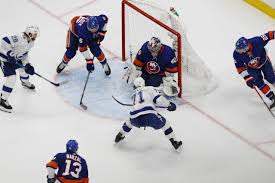 As fun and thrilling Tuesday night was, the opposite took place Thursday night.

The Islanders could not replicate the same magic they did on Tuesday night in overtime. After taking the Tampa Bay Lightning to second straight overtime, they bowed down to them 2-1 in overtime after Anthony Cirelli scored the game-winning goal in Game 6 of the Eastern Conference finals. Series over. Season over for the Islanders. This series ended in six games.

Bittersweet can be best described about the series when it was over. Disappointment. Relief. Pride.

Disappointment since it appeared this series could have gone to seven games with the way the Islanders suffocated the Lightning defensively. Relief because the season turned out to be taxing and everyone ran on fumes at the end. Pride because the Islanders learned so much about themselves against the Lightning. To take it to six and almost took it to seven says a lot about how good the Islanders are and how much better they can be.

At least, it did not end on a bad call or a fluke goal. That would have been tough for the Islanders to take. It ended on a goal that Cirelli found an open space and put the puck in after Barclay Goodrow handed it to him. Nothing anyone can do there. It just wasn’t meant to be in the end. No reason to place the finger of blame here.

It could have been the Islanders used all their energy from Game 5 and this game that things fell apart in the end.

It may be hard to accept now, but the Islanders made us proud for the way they made it a series and made the Lightning earn a trip to the Stanley Cup Final. No one could make a case last week when the Lightning went up 2-0 against the Islanders. They made the postseason memorable just by winning two playoff rounds and being one game away from a Game 7 in the Eastern Conference finals.

The Islanders seemed destined to play Game 7 in the first period when Devon Toews scored the first goal of the game on a wraparound. It just seemed the stars were aligned for that to happen. Then, Victor Hedman tied the game later in the period.

The Islanders shot as much as they could, but Lightning goaltender Andrei Vasilevskiy made the saves he needed to make.

Mathew Barzal and Anthony Beauvillier appeared due to get a timely goal, but they didn’t score. Quite frankly, they were ineffective in this series. Maybe it was the grind of the postseason that caught up to them. Maybe they were not ready for the moment. It turned out to be a learning experience for them where they can get better from it.

Still, you kept waiting for the Islanders to have one more magic in them despite all the odds. Semyon Varlamov put on a championship effort by making 46 saves. It just wasn’t going to happen.

Give the Lightning credit for finding a way to win this game and end it. They will deny it now, but they know there was pressure on them to finish the Islanders off. Had they lost this game, there would be pressure on them and questions about their ability to finish off a team with a chance to go to the Stanley Cup Final. Remember they blew a 3-2 series lead against the Pittsburgh Penguins and Washington Capitals in the Eastern Conference final, so history could repeat itself once again.

The Islanders leave the Edmonton bubble and go home knowing they are good enough to beat the Lightning. They know they are a move or two and internal development away from being a Stanley Cup contender. They experienced the grind of what it takes of being a Stanley Cup champion. They will be better for this.

Until then, it’s all about trusting the process. The Islanders served as the only team in town worth watching. They entertain, and they win. They are closer to winning a championship than the rest of the garbage teams here that play in town. They can win it all as soon as next year. This year could have been the year actually.

The Islanders had the town buzzing as the playoffs went on. There was an element of intrigue about them during this series against the Lightning. The public knows this team is on the way to winning a championship.

It’s a shame the Eastern Conference finals did not go one more game.

We will never know if the Islanders could have pulled off a 3-1 comeback deficit against the Lightning.

They sure got us to believe to the bitter end.