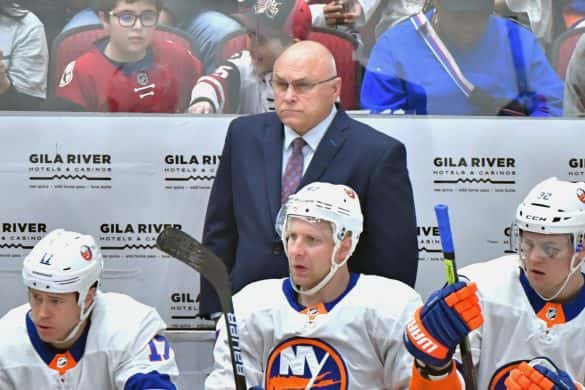 They boast one of the best hockey coaches in Barry Trotz and one of the best general managers in the history of the sport in Lou Lamoriello. Islanders owners Scott Malkin and Jon Ledecky demonstrated they have the goods to run an NHL franchise by hiring the best people to run the hockey operations, spending money on players and getting past players to connect with the franchise now. Oh, and they will be playing in a new state-of-the-art hockey arena at Belmont (think SoFi Stadium) after next season if all goes to plan.

The Islanders need to finish the job either this coming season or the year after that. Trotz and Lamoriello are not getting any younger and they won’t stay here forever, so when opportunity presents itself, the Islanders need to seize it. A Stanley Cup validates what the Islanders built these last two seasons. Islanders fans trusted the process, and it worked. Now it has to end with Anders Lee receiving the Stanley Cup from NHL commissioner Gary Bettman.

Over the past two seasons, the Islanders displayed the maturity of a champion. They put on a professional effort every game. They understand the responsibility of bringing it every game. They know how to win. They display resilience. They showed the Tampa Bay Lightning they would not back down by making this a series and almost had a shot to play Game 7 against them.

But sooner or later, players get old. The Islanders have maybe one or two year window to win the Stanley Cup. They should be a Stanley Cup contender heading to next season. They have to finish the deal.

The Islanders never had the pressure to win these last two seasons. It’s been a honeymoon for Trotz and Lamoriello. They deserve it for what they accomplished here. But now fans want to see a championship. The franchise deals with a 37-year-old championship drought. 1983 might as well be 1940 around here. Expectations will surely be changed here.

As much as the players and fans want it, so do Trotz, Lamoriello, Ledecky and Malkin.

Trotz would love to win one or two more Stanley Cups before his great coaching career comes to an end. If he accomplishes that, he should be a cinch to be in the Hockey Hall of Fame. He should be there regardless just by his body of work as an NHL coach of the Nashville Predators, Washington Capitals and Islanders.

Lamoriello entered the Hockey Hall of Fame.in 2009 for his work as the Devils general manager. Still, he strives to win more Stanley Cups. He feels he has so much to prove after his Devils tenure ended badly. He would love to be the guy to win Stanley Cups for two different franchises. His impact in this market is immeasurable. He will try to stay on as the general manager as long as he can to the point he may die on the job. Still, he desires to cap off a fantastic hockey career by leading this franchise to a Stanley Cup.

Ledecky and Malkin showed they are legitimate owners. They are the best owners in town by far. They want to win the Stanley Cup to validate their work as Islanders owners. It’s refreshing to see owners so dedicated to the cause rather than just be in it to make money only.

It would be disappointing if the Islanders fell short of the goal after spending and investing so much time of trying to get it done.

As fun as the ride has been these last two seasons, everyone wants more now.

It won’t be easy, and that’s the way it should be. Teams in the Eastern Conference will get better. The Philadelphia Flyers can build off from their playoff experience this season. The Tampa Bay Lightning and Boston Bruins won’t be going anywhere. Carolina Hurricanes feature a good young nucleus.

The Islanders grew up to be a Stanley Cup contender. Now it’s time to finish the job.

Coming close won’t do anymore. Not when the Islanders went as far as they could to experience the agony of defeat last week.