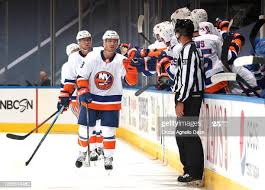 Anthony Beauvillier is back in a big way.

After going through a funk in February and March, he came out refreshed and flying from the start. The result showed when he scored a decisive power-play goal in the second period that had the Islanders hold on to a 2-1 Game 1 victory against the Florida Panthers on Saturday afternoon in the best-of-five play-in round at Scotiabank Arena in Toronto.

Beauvillier appeared in better shape as a result of conditioning during the COVID-19 pandemic that paused the season. He peppered and tenderized Panthers goaltender Sergei Bobrovsky often and early, and it resulted in a power-play goal that gave the Islanders a 2-0 lead at 3:39 in the second period.

Islanders coach Barry Trotz loved the way his team responded in the restart by playing well defensively and doing the little things such as winning faceoffs and not giving the Panthers second chance of scoring. He had to be even more encouraged when his star player came through in a game that the Islanders had to win in trying to qualify for the playoffs.

Beauvillier has to play like the Islanders best player for the team to win playoff games.

Maybe there could be more to come for him. All it takes is one goal to get it going. Beauvillier may have that going for him. Remember he scored a goal in an exhibition game against the Rangers earlier this week, so maybe that jumpstarted him.

He was on pace to score at least 25 or 27 goals this season. He stopped at 18 after the pandemic struck. Yes, he slumped, but he would have figured it out in March and found a second gear. Good hockey players find a way, and he is one of those guys.

The fourth-year Islander scored clutch goals at times last season, so there was a reason for him to have a great season this season. He started off on that pace, too.

He provides the Islanders optimism to why they can extend their season to the fall. He is a natural goal scorer in a sense he is a take-the-puck-and-score player. Rather than wait for his best shot or try to pass, he shoots it. Refreshing since at times the Islanders tend to skate around the puck and hope to capitalize on other team’s mistakes rather than create their own shot.

People forget he is just 23 years old. He still has work to do to be great. He is going to have to learn how to score breakaway goals.

There’s no doubt about how good he is. He can take on hits and keep on ticking. He plays an all-around physical game where he can play physical and take the puck.

Let me put it this way about how good Beauvillier is. He displays more toughness than John Tavares, who tends to wilt in big moments during his time with the Islanders. When Tavares decided to go home and play for the Maple Leafs, it was not a loss because this gave Beauvillier a chance to be the guy and the star the Islanders crave.

He set the tone early and often in this game by taking the play to the Panthers, which rubbed off on his linemates.

The Islanders are more known as a defensive team that won’t make mistakes. They demonstrated that in the third period when they did not give the Panthers any room to score or get second chances.

But they know they can’t rely on just being a defensive team. They need to get goals, and they have a natural goal scorer in Beauvillier. He gives the Islanders a reason to believe they can do damage in the playoffs.

He scored a playoff goal in eight games last year. There’s a reason to believe he will do more than that this season, and this goes back before the pandemic struck. The Islanders expected to play in the postseason when the season started, and they figured to expect so much out of him come playoff time.

When the pandemic took place, no one knew if the Islanders would be in the playoffs.

The NHL gave the Islanders and Panthers a chance to show they have the goods to be in the playoffs by playing in a play-in series.

On this Saturday, Beauvillier and the Islanders showed they are playoff worthy.

You can email me at lesliemonteiro97@gmail.com or follow me at Gab: LesonSports