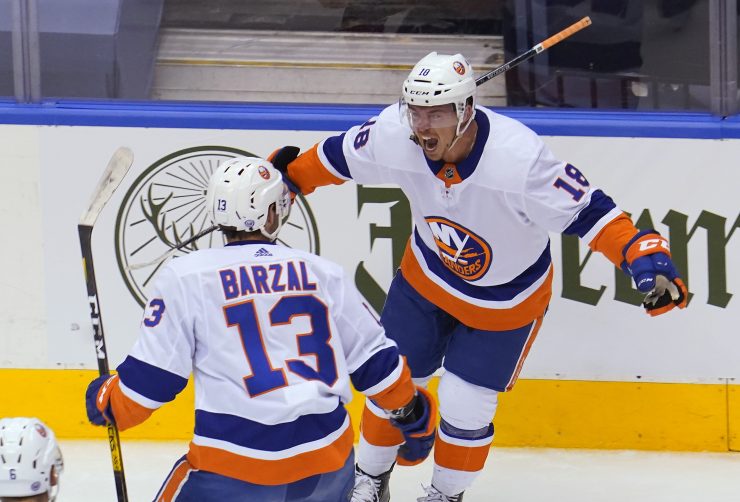 The Florida Panthers made the playoff qualifier round a series by taking a 3-2 victory over the Islanders to avoid elimination on Wednesday afternoon.

The Islanders shrugged this setback off. They know they are the better team, and they would play like it in the next game. They also know the Panthers had to win two straight games to beat them.

They displayed their killer instinct in eliminating the Panthers after a 5-1 rout Friday afternoon at Scotiabank Arena in Toronto. They await their first round playoff matchup next week.

It was easy to understand their thought process. They have a star player in Anthony Beauvillier, who plays like a difference maker. Their defense can win games. They are so well-coached to panic or be overconfident. They understand the process of knowing how to win games and being even-keel.

With a 2-1 series lead, the Islanders didn’t feel any pressure to win the game. That approach helped them get through this game.

He continues to play like a star is born. In this series against the Panthers, he scored three goals, garnered two assists and shot 16 shots. With the way he is going, the Islanders can extend their season all the way to the fall. He finds a knack to perform in the playoffs, which can be a burden for star players such as John Tavares or Henrik Lundqvist or anyone that plays for the Rangers.

For Beauvillier to set the tone in this game, it’s captain-like. He came out ready to play, and his impact showed. He knew he had to come out and perform so that the Panthers don’t feel like they got a chance with a new life. From this performance, look for him to be the Islanders captain in a few years.

He does not have to wear the “C” right now to show he can lead. His play said it all in this series, especially in Game 4 of this qualifier.

The defense frustrated the Panthers for most of this series, and Game 4 was no different. The Islanders checked the Panthers from start to finish. The Panthers failed to generate scoring chances or create their shots. In other words, they played like a team that had a first taste of a playoff series by being so raw that they could not know what to do. A veteran team like the Boston Bruins or Tampa Bay Lightning would not be fazed about the Islanders playing physical and tough against them.

Like the Islanders, the Panthers received a gift from the NHL to participate in a playoff qualifier round. They played like a sacrificial lamb that were just happy to be there, even though they didn’t deserve it. At least the Islanders played well to start the season just to go through a funk in February.

There was no panic from the Islanders’ end, and it starts and ends with the coach. When a head coach knows what he is doing, it filters to the players. Islanders head coach Barry Trotz earned the respect of his players the minute he got the job with a Stanley Cup championship to show for it as the Washington Capitals head coach. He knows how to hit the right notes to get through to his team.

With the head coach on the Islanders bench, there was no reason to be concerned about the team panicking or blowing this series.

The players know what to do. They tasted playoff hockey over the years to know how to handle the ebb and flow of it. One game or one play takes on its own meaning. The Islanders are mature enough not to make much out of a game whether it’s win or lose. It speaks well about them.

The Islanders came out firing right away in this win. They expressed no interest in giving the Panthers any more chances. Their intent was to finish them off, and they did.

They showed there was no reason to ever doubt them in this series.

The Panthers couldn’t find a way to elevate their game to make the playoffs.

They were just happy to even play four more games while the Islanders played like they want to stay in Toronto all the way to October.