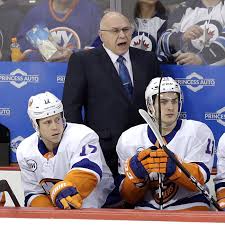 Last time the New York Islanders played, they struggled to score and found ways to lose. They barely hung around in the Eastern Conference standings for the last playoff spot. They played like a tired team that needed time away from the rink.

The NHL granted them a mulligan by having them play in a play-in series that can help them make the playoffs. It starts Saturday afternoon when they play the best-of-five series against the upstart Florida Panthers at Scotiabank Arena in Toronto as part of the league’s restart. Either they win the series to play the second season or they go home in a week. It’s win or go home.

All the Islanders can ask is an opportunity. They will get it. This time, Johnny Boychuk, Casey Cizikas and Adam Pelech will play after missing time with injuries before the COVID-19 pandemic. They also should be fresh after a long layoff. Anthony Beauvillier and Mathew Barzal should be ready to go after being worn out in February.

This restart provides reasons to be optimistic about the Islanders. They can win the Stanley Cup with every team starting over. Whoever gets hot will win it all.

The Islanders have as good of a chance as any Stanley Cup contender. They have the best coach in hockey in Barry Trotz. They feature players who know how to do well in the playoffs such as Thomas Hickey, Josh Bailey, Derick Brassard and Brock Nelson. Their defense is as good as any team in the league. Their goaltender gives them a chance to win games in Thomas Greiss, who should be the No. 1 goalie in this reset since he outplayed Semyon Varlamov.

Sure, best teams such as the defending Stanley Cup champion St. Louis Blues, Washington Capitals, Tampa Bay Lightning and Boston Bruins make a case, but remember something: the best teams don’t win the Stanley Cup. In this restart, everyone starts over, and it can be dicey for those teams, which rust can be a factor.

Same can be said for the Islanders, but watching this team, I trust this team to be ready to go. Trotz prepares this team well, and there’s no reason to doubt him in this situation.

If it was any other coach, it would be easy to have doubts about this team. A good coach comes a long way, and Trotz is great as it gets. Everytime I watch him on the bench, I am amazed the Islanders actually found a way to convince him to coach them. It helps the franchise have an ownership that is committed to winning and Lou Lamoriello, but still. Trotz could have waited for the best job available that can help his chances to win another Stanley Cup.

For him to take a chance on the Islanders, he deserves credit. He knows how to run a game. He brings out the best lines each game. He puts his players in a position to succeed on the ice by providing the right matchups. Most importantly, his team comes out prepared every game. The Islanders haven’t had a coach that knew what he was doing since Peter Laviolette.

Barzal and Beauvillier should be refreshed and ready to go. Barzal knows how to be a playmaker, and that benefits Nelson, Hickey and Bailey. Beauvillier can take the puck and score, and having Barzal makes his job easy.

Don’t forget the Islanders acquired Jean-Gabriel Pageau to make the power-play better in the trade deadline. He scored a couple of goals in seven games before the season was paused on March 12 because of the COVID-19 pandemic. His 12 playoff goals could prove to be handy for them this season.

All the pieces are in place for this team to make this summer memorable. Of course, it could end this week, too. But my money’s on the Islanders to play all the way to late August. Who knows? Maybe September.

This is the beauty of it. No one knows what to expect. The players do, and they expect to be hoisting the Stanley Cup this fall.

The Islanders are thankful for the opportunity. It could be worse. The league could have started the Stanley Cup playoffs, and the Islanders would not be in without getting a chance to prove they belong there.

The restart changes things. The Islanders get a second chance. They are ready to make the most of it.

You can reach me through email at lesliemonteiro97@gmail.com or Gab: LeslieMonteiroonSports