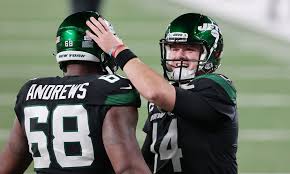 Jets head coach Adam Gase likely coached for his job Thursday night at MetLife Stadium. Not only did he need a win, but he needed Sam Darnold to quarterback his team to a win.

Gase received neither of that. The Jets took a 37-28 loss to the Denver Broncos, and Darnold could not orchestrate a drive to lead Gang Green to a victory when it mattered in the end.

At least, the beleaguered Jets head coach may have earned a reprieve from being fired for now. The Jets put on a respectable performance. On this night, his quarterback failed his coach more than the other way around. This could be just the excuse for Jets CEO Chris Johnson to hold on to Gase rather than pay him to go away.

Gase knows he likely will be fired once the season is over unless Darnold makes improvement right away. At this point, I don’t like Gase’s chances when it comes to Darnold improving.

With the Broncos holding on to a 30-28 lead over the Jets with 3:15 to go in the game, the moment seemed just right for Darnold to come up with a moment to show he is the right guy to lead the Jets. It provided an opportunity for him to show he was the guy that can extend Gase’s coaching career now and beyond. Instead, he shrunk in this moment the Jets needed him the most.

The third-year Jets quarterback failed to go deep and put the Jets in a position to be in the red zone. He couldn’t even take his unit to the Broncos territory. He mustered a first down once in that crucial drive. The Broncos put an end to his misery by sacking him with 2:05 to go in the game.

From there, Broncos running back Melvin Gordon ran for a 43-yard touchdown, and his touchdown put a dagger on the Jets for good. The Broncos extended their lead to 37-28, and that was that for the Jets.

Darnold’s sack at the end symbolized everything that is wrong with the quarterback in his time here. He struggled to improvise. He spent too much time worrying about getting hit than making a play. He could not even run for yards. If he can’t do well under duress, how good can he be?

Here’s the sad part of all this: No one was surprised he did not come through.

Most football fans made up their mind that Darnold will never be that elite quarterback. Most Jets fans are starting to give up on him after every Jets loss. Darnold provided enough sample size to make them think this way.

Look, the Jets did him no favors by not building an offensive line and failing to give him a wide-receiver that is a game-changer, but no one wants to hear excuses like that. Quarterbacks must find a way to make plays under duress. Broncos quarterback Brett Rypien found a way, despite his offensive line being nothing special.

Darnold needs to be a difference-maker when it matters. He showed he hasn’t done it so far. Small sample sizes turn out to be big sample sizes after a while.

Maybe Darnold needs to go elsewhere for him to unlock his potential. It may not be working here. He showed he can’t get it done when it matters.

When the Jets likely hire a new offensive head coach, he likely wants a new quarterback that he can mold and grow than go with Darnold. No one can blame him if he wants to go in a different direction, knowing he may see nothing to think Darnold is his guy.

Darnold regressed so far. He entered this season that he would take the next step being that it happens to quarterbacks in year 3. It turned out to be the opposite so far. He throws more picks, and he can’t seem to rally his team around when they are behind. Just one time, can he show he can be the guy?

Thursday night provided him that opportunity, and he came up flat just like any young Jets quarterback that tried to supplant Joe Namath as the quarterback of the future. It just could be he is not that good. His interceptions and his sacks speak for itself.

Darnold’s bobos can laud him scrambling from a sack to run for a touchdown to open the game. That’s great, but quarterbacks should be judged on what they do in a tight game like that crucial drive that Darnold was involved in. The Jets quarterback failed there, and there’s no defending him.

He gets 12 more games to prove that he can be the guy. No one expects him to lead the Jets to the playoffs. Shoot, everyone knows he would have a hard time leading the Jets to many wins with the talent he has to work with. Is it too much to ask for him to lead a team to a win on a crucial drive in the end for one time only?

We set the bar low for Darnold, which is a sad commentary on him, us and the winless Jets.

If he can’t do that, why should he be a Jet any longer?