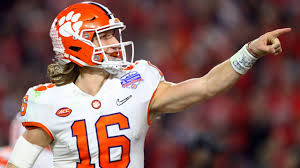 The San Francisco 49ers hunkered down in North Jersey for two weeks since they played the Jets and Giants at MetLife Stadium in Weeks 2 and 3.

They left town after Sunday’s 36-9 beating of the Giants. This came after they destroyed the Jets’ will last week in a 31-13 victory. Not only did they come home to the Bay Area with two victories against the New York teams, but they put the Giants and Jets out to pasture for the season most likely.

So now it has come down to this: New York football fans root for their team to lose just so they can get the opportunity to see Trevor Lawrence play for their team 16 games a season. Football wonks dubbed him as the No. 1 overall pick in next year’s draft. He exhibits the arm, smarts and moxie to be a franchise quarterback.

Yes, three games into the season, and the Giants and Jets likely played themselves out of this season for the fourth straight year by respectively going 0-3 after Week 3. The Jets joined the party three hours later on Sunday by taking a 36-7 beating by the Indianapolis Colts at Lucas Oil Stadium.

No one can fault the fans here. This is on the Giants and Jets for putting an awful product in recent years for fans to be in this position. Shame on them, not the fans.

They know Lawrence can only save either franchise from being the Detroit Lions. It’s hard to be confident about Giants general manager Dave Gettleman building a great team when he hasn’t done it in two seasons, and the Jets always seem to mess up year in and year out with the draft. Does anyone think Giants ownership and Jets ownership can make the next quarterback savior successful?

Lawrence could be blinded by the passion and bright lights of the city, but would playing for awful owners be a great thing for him? If anything, playing for the Giants or Jets would be a burden for him. Mark Sanchez can relate. He embraced the role of a savior of the Jets until the losing got the best of him. It sure seems Jets quarterback Sam Darnold has the same problem.

Douglas could use Lawrence or Fields as a way to buy time in building the Jets.

Darnold showed he has not made a case to be the Jets quarterback of the future or even the present with his awful start. His unit fails to be on the field longer than five minutes. He threw four interceptions this season, including three of them on Sunday afternoon. As the Jets quarterback, he threw 32 interceptions. It’s one thing to throw many pick-sixes as a rookie, but it’s another to keep doing it year in and year out.

Circumstances affected Darnold. He deals with a lousy head coach in Adam Gase, who has no idea how to operate an offense, and he does not have a game-changing wide receiver, ferocious offensive line and a competent running back. Still, we can only sympathize with him to a point. Sooner or later, he must show he can play like a difference maker in a tight game. Great quarterbacks find a way even if they have nothing to work with. Outside of his return from mononucleosis when he threw two touchdowns in the Jets’ 24-22 victory over the Cowboys last season, he offered nothing to think he can be a star.

It could just be Darnold may have to go to another team that can unlock his potential. It would be an indictment of the Jets if that happens, and it should make Lawrence think twice about wanting to play for them if they draft him.

As for the Giants, they may not be this bad to get Lawrence. Don’t get me wrong. Daniel Jones showed he is not an NFL quarterback material. He is an interception machine, and the Giants haven’t won games with him. After Sunday’s game, he has six turnovers, 20 fumbles and 16 interceptions in 16 games. But he’s competent enough to win at least four games.

I find it interesting Giants fans set their sights on Lawrence. It wasn’t long ago they thought Jones would be their savior. They anointed him after leading the Giants to a victory against the Tampa Bay Buccaneers in his first NFL start last season. My how things changed now.

The Jets odds of getting Lawrence are much better than the Giants. Unlike the Giants, the Jets don’t have many playmakers to boast. It could be by design out of Douglas. He did not improve this team this offseason with the idea he might be interested in the Clemson quarterback.

No one should be fooled that Lawrence is the be all end all. He may win games, but he won’t win a championship or lead a team to the playoffs by himself.

Despite all that, New Yorkers lust for him for one reason: He could make New York football interesting and watchable again.

You can reach me at: lesliemonteiro97@gmail.com