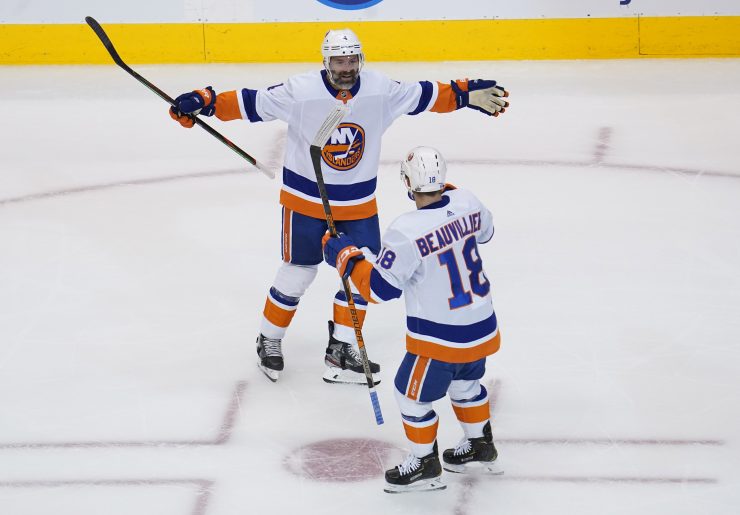 Most Islanders fans expressed confidence about their team’s chances against the Philadelphia Flyers in Game 7 prior to Saturday night. They knew their team did not play that badly to start doubting them. They understood playoff hockey features ups and downs. They realized the Flyers could run out of steam after playing two overtimes and one overtime to stave off elimination twice.

The Islanders seemed well-equipped to win Game 7 because of the character of the players and the excellence of the coaching staff. They earned the benefit of the doubt from a fanbase that yearned to go back to the Eastern Conference finals since 1993.

The Islanders validated their fans faith by beating the Flyers 4-0 at Scotiabank Arena in Toronto to win the Eastern Conference semifinals. Scott Mayfield and Andy Greene scored the first two goals of the game in the first period en route to the victory.

The Flyers knew it was over after the first period. There would be no comebacks this time. The Islanders were determined to make sure their defense played well enough not to blow this lead. Plus, the Flyers looked flat and exhausted as predicted heading to this game in this space.

The Islanders appeared ready to go from the start. It speaks well of the coaching staff as always. They have the players ready to go for a game like this. Islanders head coach Barry Trotz earned his reputation of being one of the great coaches in the NHL for a reason.

It was interesting that Trotz started Thomas Greiss for this do-or-die game. Semyon Varlamov wasn’t great, but he wasn’t bad. Figured he would ride with Varlamov and hope for the best. It took stones for the Islanders head coach to make a move like that. Changing goaltenders send a message of panic in a Game 7. Most head coaches would not make a move like that.

This explains why Trotz is one of the best if not the best in the business. He just has great instincts on what players to use in his situation. This was not a black and white decision. Yes, Varlamov struggles in big games like that, but he did well enough not to lose a start in Game 7. He went with his gut in using Greiss, and it paid off. There’s where coaches earn their money.

Now, Trotz has no choice but to ride and die with Greiss in the Eastern Conference finals. Who knows if Varlamov is well-equipped to handle being bypassed for Game 7? It’s a chance the head coach had to take, and it worked out well for him and the Islanders.

When a coach experienced success with moves like that, the players will follow their coach’s lead. Trotz earned street credibility as A.J. Mleczko would say about him.

Greiss played well enough early to set the tone. The Flyers peppered shots through him and created traffic to get themselves started, and Greiss stopped them.

The Islanders understood they had to finish the Flyers off in the first period. The more they struggled to score, the more confidence the Flyers would receive. That game plan turned out to be the key to the victory.

Once the clock ticked, the Islanders partied like it was 1993 along with their fans.

It’s been a long time coming for the fans who saw awful hockey with this franchise. It was telling that the last time the fans saw the Islanders made it to the conference finals, they have yet to reach puberty. That’s how old we are now, and that’s how bad this franchise has been prior to Jon Ledecky and Scott Malkin buying the team.

Face it. Getting to the Eastern Conference finals was not an option. It was a must for this franchise and players. Opportunities like this don’t come often. There’s no wait until next year. Either they get it done or this season would be a disappointment, especially for a team that led the series 3-1. They couldn’t blow this. They knew what was at stake.

Plus for a franchise that wants to continue its growth and ascension, getting past the second round would validate everything they worked for since last season.

Now that the Islanders cleared that hurdle, they are eight wins away from hoisting the Stanley Cup. It gets harder now with the speedy Tampa Bay Lightning being their next opponent.

But after going through the wringer against the Flyers, this should shape the Islanders ready for the next round that starts Monday night at Rogers Place in Edmonton.

Nothing is never easy when it comes to winning the Cup.

For the Islanders, Saturday night turned out to be the test they needed.