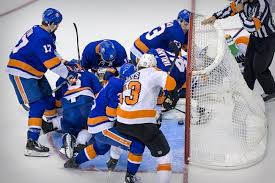 Hard to believe Game 7 takes place Saturday night between the Islanders and Philadelphia Flyers. I figured this series would end Thursday night at least. So much for that. The Flyers lived for another day after a 5-4 Game 6 victory in double overtime on an Ivan Provorov goal at Scotiabank Arena in Toronto.

NBC loves this, and even the NHL. Game 7 takes place after the Kentucky Derby. Talk about ratings draw for the league and its network partner.

Give the Flyers credit. They won in overtime to stave off elimination in Game 5 with a 4-3 victory over the Islanders, and it took two overtimes for them to play one more game at least in the playoffs. They put their big boy pants on for sure as Flyers coach Alain Vigneault requested prior to Game 5. They displayed championship level stuff in the last two games.

If the Flyers win the series, they deserve it for the way they handled their own adversity and finding a way to beat the Islanders. If anyone wants to get on the Flyers bandwagon and wager money on them for Game 7, be my guest. But it would be hard to bet against the Islanders in this situation.

Sure the Islanders choked a 3-2 and 4-3 lead in Game 6, but that would give the Flyers a disservice by not crediting them for tying. The Flyers would make Lou Grant from the Mary Tyler Moore show proud by showing spunk.

Both teams played well enough to be in this position for a do-or-die game. Instead of placing blame, enjoy it for what it is and let the best team win.

Here’s the best part of this series: It has gone fast. We haven’t waited it out for long like your typical playoff series. It seemed like it was yesterday when the Islanders put on a flurry of scoring three goals in Game 1 to earn the first victory of the series.

The Islanders embraced playing in Game 7. They know they performed well enough not to worry in the last two games. It’s the right attitude and approach to take. It’s what professionals do. With the team being well-coached and the character they displayed these last two seasons, they earned the benefit of the doubt.

By taking it to Game 7, this could be another step of the Islanders’ growth of being a Stanley Cup championship team. The Islanders never experienced adversity in the playoffs. They had it easy playing the Florida Panthers and gutless Washington Capitals so far in the bubble at Toronto. This could serve them well because the Tampa Bay Lightning will be awaiting them if they advanced to the Eastern Conference finals. The rounds get harder and harder as the team advances. In fact, the game itself gets harder as the playoffs go on.

Sunday marks an important time in the organization. The Islanders can take the next step of building a Stanley Cup contender by advancing to the Eastern Conference final since 1993. Getting to the second round is nice, but getting to the third round would be something. It means they would be eight wins away from hoisting the Cup. It would validate the job Lou Lamoriello and Barry Trotz have done in building a foundation to success.

The Islanders witnessed the second round experience last year. The Carolina Hurricanes swept them. Losing in the second round would not do them any good this time around. Getting to the Eastern Conference final would validate this year’s success, and it would inspire optimism heading to the offseason. It would encourage free agents to sign with them, especially with a new arena coming up shortly.

The Islanders are not far away from winning the Stanley Cup. They can win it this year or next year. This playoff series serves as just another chance of the Islanders building something.

The Islanders should be the favorite to win Game 7. For one thing, they play great defense and they are a disciplined team. They won’t just bend over to the Flyers easily. Second of all, the Islanders boast guys that know how to shine in games of this magnitude whether it’s Anthony Beauvillier, Josh Bailey, Brock Nelson, Jordan Eberle or Mathew Barzal. Finally, hard to believe the Flyers may have left in the tank after playing so many overtime games in this series just to be in this position.

Rather than fret about it, enjoy it for what it is. After all, it’s Stanley Cup playoff hockey. Expect the drama that comes with the ebb and flow of the series.

The Islanders are not worried, and they shouldn’t be.

The Flyers have the Islanders where they want them.