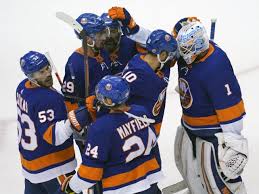 We start the week knowing something special could be happening this week.

Fans acknowledge this could happen after the Islanders took a 3-1 series lead with a 3-2 victory over the Philadelphia Flyers on Sunday night in the Eastern Conference semifinals at Scotiabank Arena in Toronto.

There’s no sense in thinking about whether that’s jinxing the team or not. Sure, the Flyers could win three straight to win the series. It’s hockey. Anything can happen. We saw 3-0 series leads and 3-1 series leads turn into losses for hockey teams. The Flyers witnessed both sides of the spectrum. They came from a 3-0 deficit to beat the Boston Bruins in the first round in 2010, and they choked a 3-1 series lead to the Devils in the 2000 Eastern Conference Finals and lost in the end with Devils captain Scott Stevens knocking Flyers captain Eric Lindros down mercilessly on the ice with an emphasis.

But from the eye test, does anyone seriously think the Islanders will choke in this series? The Islanders have the fabric and character to know how to win. They are also well-coached for that to happen. This is a smart, disciplined team that does not find ways to lose. Hard to believe they would lose three in a row.

We may get ahead of ourselves, but it’s okay to dream and envision what’s next. It’s what fans do. Players can’t afford to do that since they are paid professionals that have to approach each playoff game like it’s a different game or series.

No one can blame the fans for thinking what’s next. The Islanders are too good for fans not to think about the Eastern Conference finals. The last time they advanced past the second round was in 1993. I was a 13-year-old lad at the time (I hope I am not that old!), and after watching a bad team run by inept owners and general managers, I never thought I would see the day the Islanders would head to the conference finals. Tuesday could be a reality or in Game 6 or God forbid Game 7.

The Flyers played the Islanders tough in this series, but the Islanders received the positive end result in Games 1, 3 and 4. Also, remember the Flyers choked a 3-0 lead in Game 2 to take this to overtime tied at 3 until Philippe Myers scored the game-winning goal. Yes, the Flyers won, but in the end, the Islanders planted a seed to their second round opponent that they got the Flyers where they wanted them. The Flyers’ Game 2 win resulted in the Islanders winning Games 3 and 4 this weekend in a sense the Islanders felt confident they could beat the Flyers the rest of the way after making a game of it.

Had the Flyers won Game 3 on Saturday night, it would be a different story. The Flyers took a 1-0 lead at the end of the first period, but the Islanders scored a couple of goals in the second period, and ended up winning 3-1.

In Game 4, the Flyers and Islanders tied it at 1 at the end of the second period. The opportunity presented the Flyers to take the lead before the second intermission. The Flyers peppered many shots at Thomas Greiss, who started in the nets for the Islanders. The Islanders appeared like a team that was fatigued, so the Flyers had the advantage, but Greiss kept the game tied at 1 by the saves he made.

So again I ask: How are the Islanders going to choke when they continue to play well? They won 10 games in the postseason, including the bubble play-in series against the Florida Panthers.

Yes, it’s easy to think about the next round opponent. It could be the Boston Bruins or Tampa Bay Lightning. Two teams that the Islanders have had trouble the last few years, but a matchup that won’t be intimidating, either. Anything can happen in the conference finals.

Go ahead and dream. This coming week should be fun.

After decades of bad hockey, the Islanders fans earned that right.