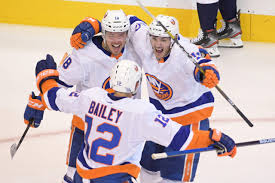 Everything went the Islanders’ way so far since the coronavirus pandemic. The NHL gave the Islanders a chance to redeem themselves by inviting them to a play-in game at Scotiabank Arena in Toronto, which is the home of the Eastern Conference playoffs after they struggled in February.

The Islanders made the most of it by beating an overmatched Florida Panthers team to make the playoffs. In the first round of the playoffs, the Islanders stifled the Washington Capitals defensively to win the series in five games. They get another gift by avoiding the Boston Bruins until the Eastern Conference finals if the Islanders advanced from the Eastern Conference semifinals. They play the Philadelphia Flyers in the second round that starts Monday night.

The Islanders love their chances against the Flyers. Not only because they are playing their best hockey right now, but they finished their season series against their second round opponent by going 2-0-1. They matched up well against their opponent because the Flyers don’t have many scorers, so it’s easy for them to stifle them defensively.

The Flyers can talk about Carter Hart in the nets all they want. He deserves props for the way he has played for them this season. But the Flyers hype goaltenders such as Brian Boucher, Roman Cechmanek, Brian Elliott and Sergei Bobrovsky over the years just to see them fail in the end. Let’s see how Hart does as the stakes get higher before there is a statue of him erected at Wells Fargo Center.

Even if Hart plays great, it may not matter. The Flyers struggle to score. The Flyers’ best goal scorers in Travis Konecny (24), Kevin Hayes (23), Sean Couturier (22), Claude Giroux (21) and James van Riemsdyk (19) combined for one goal in the postseason, and Hayes scored the first postseason during the Flyers’ 3-2 Game 6 victory over the Montreal Canadiens.

Sure it can’t get any worse for the Flyers’ top scorers, but then again why should things be any different going up against the Islanders defense? The Islanders frustrated the Capitals’ top scorers such as Ilya Kovalchuk, Nicklas Backstrom, T.J. Oshie and Evgeny Kuznetsov in this series.

Smart money says the Islanders will score often, and that could be the difference in this upcoming series. Sure Hart can play excellent, but the Islanders can find a way to score if they keep peppering the puck in his direction.

The Flyers could punch, facewash, annoy and patronize the Islanders because of their physicality. After all, they have to keep their Broad Street Bullies image. It’s the only way they can beat the Islanders, but if the Capitals could not rattle the Islanders, what makes anyone think the Flyers can? The Islanders play discipline all the time.

Sorry, but the Flyers don’t scare the Islanders. The Islanders know it, too. It’s a series the Islanders should win, and most hockey wonks pick them to win. Only Flyers fans believe, but then again they think this is the year every year just to be disappointed, which makes it so amusing.

If the Islanders dominate puck possession against the Flyers, they are going to win the series. It may be a short series at this point.

The Bruins and Lightning should beat each other up to make their Eastern Conference semifinals a long series. Maybe the Islanders can take advantage of a tired team in the next round if they advance. Then anything can happen in the Stanley Cup Finals.

Sure we are getting ahead of ourselves here, but we can dream, too. It’s okay because the Islanders are dreaming big. They expect to win the Stanley Cup. They should because they had enough postseason experience to know what to do. They are so well-coached. They play with discipline, especially on defense. They roll out four lines, and they have a star that shines in the postseason in Beauvillier.

The Islanders and their fans did not make much of a big deal about advancing to the second round this time around. They know it should be expected. The goal was to advance to the Eastern Conference finals this season when the season started.

The fun part just got started. The journey continues after a well-deserved weekend off.

Stakes getting higher makes for more drama and intrigue for the Islanders.