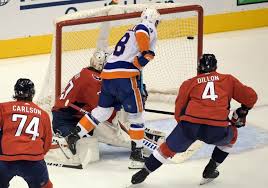 Anthony Beauvillier made minimal impact in the Islanders’ first-round series against the Washington Capitals. The Islanders managed to win three games despite all that.

With another chance to finish off the Capitals, Beauvillier saw to it this series ended on Thursday night. He scored the first two goals of the game to give the Islanders a 4-0 victory over the Capitals in Game 5 at Scotiabank Arena in Toronto. Overall, he scored three goals in the first round matchup against the Capitals.

The Islanders loved that he set the tone in finishing off a team that was begging to be finished. The Capitals looked flat again, and quite frankly, they played lifeless in Game 4 until the Islanders surrendered to complacency that had Alexander Ovechkin scored the game-tying power-play goal in the second period and the game-winning goal in the third period, giving the Capitals one more game to play.

The Islanders knew if they played 60 minutes of hockey with a lead in the next game, they would finish off the Capitals. They did this time by clogging up the ice and making sure the Capitals did not score.

Even if the Islanders took it easy, the Capitals appeared done. They played like they wanted to go home. Outside of Ovechkin, no one stood out on that team during the series. Let’s put it this way. Beauvillier outplayed most of the Capitals despite his minimal impact.

It speaks so much of the Islanders that the rest of the lines clicked well that they did not need to rely on Beauvillier. But for him, he felt he needed to make an impact in this series by filling out the stat sheet. Thursday night presented an opportunity for him. A chance to show he can be a great player in the NHL by putting the other team out of their misery.

Beauvillier scored the first goal on a power-play goal 10:19 into the first period. It started with his pass to Josh Bailey, who passed it to Brock Nelson. Nelson shot it, and then got the loose puck back, and he handed it to Beauvilllier to score.

For him to score on a power-play goal was huge in a sense the Islanders put on a 1-for-19 showing on the power-play against the Capitals prior to Game 5. The Islanders know they can’t get by with an awful power-play in the next round of the playoffs. No team wins the Stanley Cup by being putrid on the power-play. There has to be some sort of competence.

Maybe Beauvillier’s power-play goal can get him and the Islanders going. If it happens, the Islanders improve their chances of winning the Stanley Cup, especially if their star gets it done.

Beauvillier put the dagger on the Capitals in the second period when he collected a pass from Josh Bailey and powered to the net and put the puck in while being knocked down by Capitals talentless goon Tom Wilson.

On this night, the fourth-year Islander played like a star and a captain. A star in a sense he came through in a game the Islanders needed him to finish off the Capitals. A captain in a sense he understood the responsibility of finishing off his opponent.

He joined Islanders great Mike Bossy and Bobby Nystrom as the only Islanders to score multiple series-clinching goals in a single postseason. That’s a fine company for him to join with.

Beauvillier continues to grow up each playoff game. Game 5 turned out to be another growth of his career just by how approached this game. He took matters into his own hands.

With the Islanders advancing to another round, this gives him another opportunity to keep shining in the playoffs. Prior to the Capitals series, and he scored three goals in the play-in game against the Florida Panthers. There’s no doubt there’s much more in store. That’s the beauty of all this.

No matter what happens moving forward. The Islanders should feel good about their trajectory heading to next season. They can continue to be a Stanley Cup contender for the next few years because of Beauvillier. He continues to play like a star, and there’s no reason to think he can stop unless he gets the injury bug.

On a night the Islanders needed someone to step up, Beauvillier answered and aced the challenge.