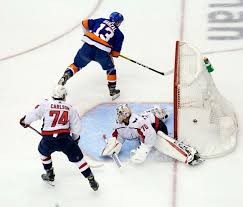 It’s what he and the Islanders envisioned when he was drafted in 2015. To be the guy that scored the game-tying or game-winning goal in the playoffs. To replace the star power John Tavares generated in his time with the Islanders.

That day arrived Sunday afternoon when he scored the game-winning goal in overtime, leading the Islanders to a 2-1 victory against the Washington Capitals. He might have put the dagger in the Capitals’ hopes of winning the series. Right now, he may have the Islanders thinking sweep when the series resumes Tuesday evening.

With 4:24 into overtime, Derick Brassard passed to an open Jordan Eberle, handing it to Barzal, heading towards Capitals goaltender Braden Holtby. Barzal then deked to the right slot that moved Holtby, and then he found the open space in the left slot to score.

Barzal can be fancy with the puck to a fault. We mean that he waits for the perfect opportunity to shoot rather than just wing it. He thinks too much when he has the puck. For instance, he should have shot the puck rather than wait to create his shot or find an open guy several times in the third period in Sunday’s playoff game. This can be frustrating.

His decision to think and find a perfect opportunity served him well in overtime. He found a way to get Holby to move out of a slot into thinking he would score from there, and he made the decision to shift the puck to the left.

This was no luck there. A playmaker scored that goal through intelligence and style. Honest to goodness, it’s been a long time an Islander scored a game-winner like that. Normally, an Islander goal comes through hard work or a lucky bounce.

Barzal scored his second postseason goal of the season, and the fourth of his career. Could it be a sign of things to come? One goal can result in many goals through confidence. It could be this moment could start great things to come for him.

Islanders fans want him to be more of a scorer than just be a passer. People forget he is still 23 years old. It’s his fourth year in the league. He played better each season, but he’s still learning about the game such as finishing his scoring chances.

On Sunday, he applied it well in learning how to finish when the opportunity presented itself. He had the puck all alone, and it was on him to finish, and he did just that to put the dagger on the Capitals in this game.

If he couldn’t get it done, when will he? He can only have so many opportunities like that. It’s on him to execute and finish. That moment found him.

He played 15 playoff games. There comes a time he needs to make his mark as a playoff scorer. Sunday came as good of a time for him to get it done.

The Capitals played like they were begging to be beaten in this game. They struggled to get any offense going as the Islanders defense continues to suffocate them and not let them get to the Islanders zone. They skated in circles. The Islanders dominated in the third period.

For once, Barzal can be known for doing the big things along with doing the little things.

Passing and making others better is great, but scoring is better. Scorers stand out in the stat sheet, win column, highlights, fame and legacy. The time arrived for Barzal to be a scorer along with being a playmaker.

If the Islanders are going to win the Stanley Cup, they need him to score more.

Maybe this moment helps him to grow up here. He came through, and this should be an encouraging development for him and the Islanders moving forward.

Sunday turned out to be his day. He performed like the best player on the ice.

A moment that has been a long time coming for Barzal.