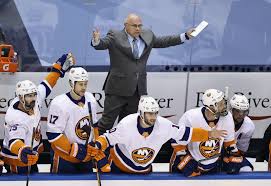 Islanders head coach Barry Trotz appears like a head coach that knows what he is doing on the bench while his counterpart Washington Capitals head coach Todd Reirden appears clueless from watching the two games of the playoff series.

The former Capitals head coach picks the right lines such as pairing Anthony Beauvillier with Brock Nelson and Josh Bailey, and he has his guys doing everything right such as forechecking and suffocating while the current Capitals coach and his team can’t seem to adapt and do something about it. That tells the story of the series.

The results validate it. The Islanders take a 2-0 series lead of the Eastern Conference Quarterfinals after a 5-2 whooping over the Capitals Friday night at Scotiabank Arena in Toronto.

If Trotz wants satisfaction right now, he should check on the Washington Capitals Twitter and message boards such as Reddit. Capitals fans used social media and message boards to call for Reirden’s firing. These are the same people that said anyone can coach the Capitals with the talent just last year. For them to pine for Trotz now, it’s poetic justice for him.

Reirden denied this was not about him versus his former boss prior to this series. He tried to deflect pressure about beating Trotz, but he wasn’t fooling anyone. He knows if the Capitals lose to Trotz and the Islanders, Capitals fans and the media would get on him. It’s a no-win situation for him, and the Capitals are playing that way. His team reflects the identity of him being tight.

Trotz has nothing to prove based on what he accomplished in his excellent coaching career. His work with the Islanders speaks for itself. But don’t mistake that into thinking he does not want to beat the Capitals. He wants to stick it to Capitals owner Ted Leonsis for not wanting to pay for his services after he won the Stanley Cup for them two years ago. He has every right to do that after Leonsis thought anyone can coach the Capitals. He was also underappreciated by Capitals fans.

Players win games, but coaching plays a role in their success when it comes to preparation, especially in hockey. The well-coached teams advance in the playoffs. In these two games, the Islanders showed their composure and poise while the Capitals seemed rattled and confused. This reflects coaching.

Trotz brings credibility based on his Stanley Cup ring on his finger, and players respect that. His voice continues to resonate with the players. No one can say the same about Reirden because he was just an assistant coach that was part of the ride when the Capitals won the Cup. It’s hard to be the guy to replace a great coach with all the pressure on him to win another Stanley Cup, especially when he never was a head coach before.

These two games reflect coaching in so many ways.

In Game 1, Reirden told his players to goon it up against the Islanders in an attempt to rattle them. The Islanders drew six penalties in the first period, but they were not fazed at all. They kept playing, and when Jordan Eberle cut the Capitals lead to 2-1 late in the second period, it was the Capitals and Capitals goaltender Braden Holtby that became rattled, as evident to Anders Lee scoring the tying goal 51 seconds into the third period. The Islanders scored three unanswered goals in that period to take a 4-2 victory.

After the game, Reirden whined about Lee’s hit to Nicklas Backstrom as “predatory”. Lee’s tying goal and the loss obviously got the Capitals head coach to act like a fool considering Tom Wilson gooned it up with several Islanders to start the game.

In Game 2, Alexander Ovechkin scored two timely goals to give the Capitals a boost. In the first period, he scored 56 seconds into the game to set the tone of this game. The Capitals needed their star to play like one in response to their choke job in Game 1, and he did just that. When the Islanders took a 2-1 lead, Ovechkin responded by scoring a goal that would tie the game.

One would think the Capitals would be inspired by Ovechkin doing all he can to win the game. He was active on the ice by hitting Islanders often. Instead, the Capitals played like they expected to lose by hoping they would somehow hold on by playing prevent defense. The Islanders regained the lead on a Brock Nelson’s goal 36 seconds later that would make the game into 3-2, and never looked back.

The Islanders made sure the Capitals would not get into the Islanders zone to score once they took the lead. When they get a lead in the third period, they finish the team off with great defense. The Islanders have taken into playing defense under Trotz since he took over. It wasn’t long ago they would blow leads under head coaches Jack Capuano and Doug Weight.

So far, this series has been about the Islanders executing their game plan by playing defense and pressuring the puck towards Holtby while instead of the Capitals rattling their opponent, it’s been the other way around. Somehow if both coaches traded places, it would be a different story.

Trotz provided guidance in those first two games when the Islanders played from behind. Reirden offered nothing but crossing his arms and hoping for the best rather than make adjustments in figuring out the rubik’s cube in the Islanders defense.

The Capitals gambled on Reirden for continuity and stability. Instead, they have a coach who can’t lead or inspire. It’s been obvious from watching these two playoff games. Maybe Leonsis now appreciates what a great coach he had in Trotz and what great coaching can do to a team. Yes, players win, but coaches provide structure and organization to help lead the players to success. The Capitals used to have that advantage, and now that advantage belongs on the Islanders bench.

It’s why the Islanders should win the series before it started.

It’s also why this series could be a short series all of a sudden.