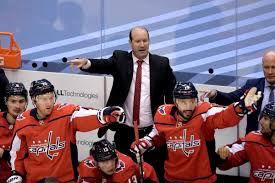 I honestly had no idea who coaches the Washington Capitals. I know it’s not Barry Trotz since the Capitals were stupid enough not to offer him a well-deserved extension after winning the Stanley Cup. They let him walk, and what the team deemed as garbage turned out to be a treasure for the Islanders.

I know the Capitals promoted from within since they felt anyone could coach that team. Capitals owner Ted Leonsis copied Cowboys owner Jerry Jones approach by letting a popular coach go (that would be Jimmy Johnson, who coached the last Super Bowl Cowboys championship) and hire someone that would work for less money while achieving success.

I figured out who the Capitals head coach was when I read a post game quote that caught my attention after Wednesday’s Islanders’ 4-2 Game 1 victory over the Capitals. It’s some guy named Todd Reirden, whose claim to fame was being Trotz’s associate coach with the Capitals. He apparently was groomed to be a head coach for a while. His salary probably is supplemented with free Washington Wizards tickets and an American Online account.

Reirden had the gall to call Anders Lee’ hit to Capitals forward Nicklas Backstrom as “predatory”. He was upset about losing Backstrom for the rest of the game.

He shouldn’t be mad at Lee for that. He should express his ire to his own players for playing goon hockey. The Capitals rely on goon tactics to win games like the Broad Street Bullies did back in the day as Philadelphia Flyers.

The Capitals featured a goon in the name of Tom Wilson, which probably is his only strength as a hockey player. Think Rangers great Sean Avery. Wilson plays the role of a pest well, and he got it going by giving out those remember me hits that would make Jets defensive coordinator Gregg Williams blush. Maybe if he didn’t start the nonsense, Lee wouldn’t have felt the need to hit Backstrom.

The saying goes it takes two to tango as in one person must make another person react. Obviously, Lee felt he had to take matters into his own hands after seeing he and his teammates get hit and knocked down with no call coming from the refs. Lee stood up for his teammates, which is the role of what a captain does.

Reirden knows full well this is part of the game. He sees it from his own players. He comes out as a hypocrite when he whines about Lee.

I would like to think it’s gamesmanship, and maybe it is, but Reirden appeared to be a whiner more than anything. It’s just rich coming from him since his team always does that. The only time the Capitals wilt is when they play the Pittsburgh Penguins, who stand up to the Capitals’ bullying tactics.

Reirden serves as a complicit to goon hockey when he does nothing about Wilson’s behavior along with John Carlson’s and Alexander Ovechkin’s.

The Islanders play hockey. They don’t engage with stupidity. They won’t start it, but they will finish it if they have to. Hard to believe Lee’s hit resembles anything dirty there. It was a clean hit that a hockey fan sees what hockey players do. This wasn’t Scott Stevens destroying Eric Lindros with a hit that all but ended his career in the Game 7 of the 2000 Eastern Conference Finals.

It’s unfortunate Backstrom got hurt in that hit, but that’s playoff hockey. Hopefully, he will play the rest of the series, even though he won’t play in Game 2.

If the Capitals use it as a rallying point, whatever. They shouldn’t need Lee’s hit to have them ready to go. It’s the playoffs. If they can’t be motivated to win playoff games, then there’s a problem. I like to think they are mature enough to rise above this nonsense.

We expect this series to be chippy as the series goes on. That’s the way it goes in the playoffs. It’s about survival.

No one thought it would start right away in Game 1 on the Capitals’ end.

It probably will get ugly before it gets better.

This itself makes Reirden’s whining amusing more than anything.