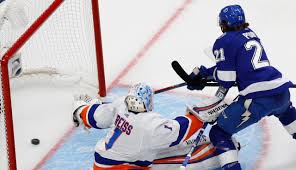 The Islanders are not facing the raw Florida Panthers, gutless Washington Capitals and overachieving Philadelphia Flyers in the bubble anymore. This Eastern Conference finals serves as a step in class by facing the Stanley Cup favorite Tampa Bay Lightning. To make it even harder, the Islanders traveled to Edmonton from Toronto on one day’s notice.

On this Monday night of Game 1 of the Eastern Conference finals, the game turned out to be ugly for the Islanders. The Lightning displayed a clinic on how to beat a great defense in their 8-2 whopping of the Islanders at Rogers Place.

The best part of this game was it was over. It wasn’t pretty to watch. The game ended when Yanni Gourde scored in the second period to make it a 4-1 game. It looked clear that the Islanders did not have a comeback in them against an ultra-talented team.

The Lightning speed stood out right away when they scored the first goal of the game in the first period. Brayden Point skated past Ryan Pulock and then made a power move to the right to shoot the puck past Thomas Greiss. There was nothing anyone could do. A beautiful play that the Lightning tends to do often. A team with great speed can beat a great defense, and that’s the task the Islanders defense deals with in the Lightning in this series.

If that’s not enough, the Islanders will have a hard time defending the Lightning on where they shoot. The Lightning can shoot from long distance.

After Jordan Eberle tied the game at 1 in the first period, Victor Hedman rifled the puck that went through the net to give the Bolts a 2-1 lead in that period on a Lightning power-play goal. Again nothing the Islanders can do if a player can shoot it from a long distance no matter how hard a player defends. Look at it as a basketball player making a shot from midcourt.

It wasn’t just the shot that made it pretty. The Lightning operated this power play with precision. It started with Point getting the puck off the draw after a faceoff and handing it to Ondrej Palat, who passed it to Hedman, who passed it to Nikita Kucherov, who passed it to Point, who handed it back to Hedman to shoot the puck to score. Think Mike D’Antoni’s seven seconds or less offense when watching this highlight of the power-play goal.

The Islanders understand they have to get used to this. They know how good the Lightning are. They played them several years ago in the Eastern Conference semifinals. They are familiar with what their players can do. Nothing changed since then. The same players they faced are still playing at a high level right now.

Pick your poison. No matter who the Islanders defend, someone on the Lightning will score. They feature so much scoring depth that could be tough to handle. With the Flyers, it wasn’t a problem since their forwards are not that fast or skilled to hurt the Islanders. The Capitals played like an aging team. The Panthers still have so much to learn when it comes to playing playoff hockey. This Lightning team comes nowhere close to those three teams the Islanders faced in the bubble.

The Lightning arrives in waves when it comes to scoring. They create an avalanche. They kept at it the entire game by pulverizing the Islanders into submission. After the Lightning took a 3-1 lead at the end of the first period, they scored two goals in the second period and three goals in the third period.

We learned in this game skill beats guile anytime and anywhere.

No question it was a message sent to the Islanders. The message served as no matter how good the Islanders are defensively, the Lightning will not stray from their game and be frustrated like the Capitals were in the Eastern Conference quarterfinals.

Go ahead and say the Lightning took advantage of a tired Islanders team. But by saying that and saying the Islanders looked rusty from a week off against the Carolina Hurricanes in last year’s Eastern Conference semifinals that resulted in a sweep, that is saying it both ways. It’s one or another.

For the record, Monday night had nothing to do with fatigue from a previous series. The Islanders faced a better team that proved a point.

Of course, Islanders coach Barry Trotz will make the adjustments. The Islanders can’t play any worse than they did in Game 1.

It may not matter if the Lightning play like they did in Game 1.

If history repeats itself in Game 2, this series could be a short one.