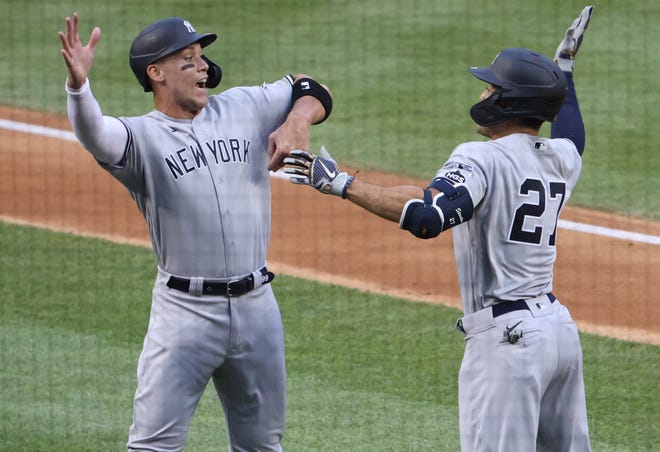 After 119 days and counting, Major League Baseball opened up its 2020 season Thursday night with two games on the docket. The Yankees played the defending World Series champion Washington Nationals followed by the San Francisco Giants playing the Los Angeles Dodgers.

The first game bored me so much that I did not bother watching the second game of Opening Night. Yes, part of it stemmed from the rain delaying the game. But I was turned off by the slow game of pace. The Yankees take such a long time with their at-bats that only the Lord can bless their fans for making them watch through it. Hopefully for Yankees fans, this pays off for them seeing their 28th championship this season after waiting for the last 10 years.

Mercifully, the rain lasted long enough for baseball to end this game in six innings with the Yankees taking a 4-1 victory over the Nationals at Nationals Park.

For Major League Baseball, this continues a troubling trend of the sport turning off viewers for such a slow of pace. The Yankees and Boston Red Sox can make soccer look like an electrifying sport when watching those two teams play baseball. It’s no wonder baseball fans below 40 years and under don’t have the patience to watch for that long. Shoot, as a 40-year-old gentleman watching the game, I only kept up for an hour until I screamed “NO MAS!”

Maybe the COVID-19 pandemic did the Nationals fans a favor of not attending the Nationals home opener. Sure, it denied them from seeing their team hoist the World Series championship banner and players receiving their rings, but at least they did not waste their money watching a boring game.

If players decide to strike after next season, they would do everyone a favor to be blunt. Who wants to waste a summer day or evening watching a five-or-six hour game when it’s not really necessary? No one can blame the inept MLB commissioner Rob Manfred for trying to speed the game up here. It shouldn’t take until 9:00 p.m. for this game to be in the fifth inning.

Other than that, a casual baseball fan would have turned the game off by 8 o’clock. I know I did, and I consider myself a baseball wonk.

This is the sign of the times in baseball where it will go long until the end of time. This could be the sign of times where a fan loses interest in the third inning.

I don’t know the answers on how to make the game exciting. I won’t pretend to know, either. That’s not my responsibility. It’s the powers that be. From current and past players to management to owners. Something has to happen.

For an Opening Day like Thursday night, it shouldn’t be this dull. There was not much hitting, running or even good defense. Granted, it’s one game, and guys are working on the fly, but this was just brutal.

In a 10-week season, it’s going to be tough for a team to get into a rhythm. Teams must adapt quickly. Most teams don’t hit their stride until the middle part of the season. This baseball season provides intrigue how teams adapt and adjust, which is why there would be nothing asterisk about winning a championship this season. With all the adversity and hurdles teams will receive, they are going to earn it.

Baseball without fans will be hard to get used to. This will take practice, and even once a fan gets used to this along with the players, it’s going to be tough. The fans play an important element in the game based on their reactions. Their energy or lack of energy can have an effect on the players at home. There’s no doubt the road team can play off from no fans at the game.

Imagine Yankee Stadium and Fenway Park without fans? The players and the game feed off the energy from the fans. It’s going to be dull watching games from there on my TV set. It sure did not feel like a baseball game at Nationals Park from watching it on television.

The game lacked pomp and circumstances that make Opening Day and the game special. The game turned out to be a snoozefest outside of the first inning.

Did we really have to wait this long for that?