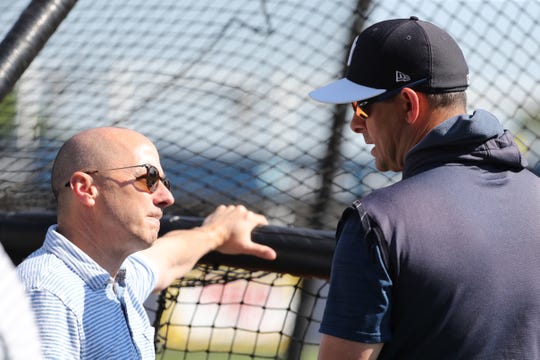 The New York Yankees will open up a 60-game campaign Thursday night against the defending World Series champion Washington Nationals. As usual, the goal is to win the World Series.

The Yankees have been stuck at 27 World Series championships since 2009. This means it has been 10 years since this legendary franchise won it all. That’s a long, long time, and it’s unacceptable with the payroll they have.

Yankees fans and the local media here looked at the Yankees as overachievers these last few years. Such balderdash. How about we start raising our standards here? The Yankees should have won at least one championship with this nucleus already. Instead, they bowed out to the Houston Astros twice in the American League Championship Series and to the Boston Red Sox in the American League Division Series.

Yankees fans came up with excuses about the Red Sox and Astros cheating over the years. Whatever. Great teams overcome that, and it’s not like the Yankees haven’t cheated themselves over the years.

The Bronx Bombers fired Joe Girardi as their manager since he couldn’t take them over the top. Fair enough. Managers can only survive for that long, and sometimes a new approach can help. Their young players could use a fresh message, and Aaron Boone provided that in his two years as a manager, even though the results have not been there.

At some point, Boone needs to show he can manage a World Series championship team, not just win 100 or more games a season. I never saw any signs of that in his tenure here.

The Yankees hired Boone mainly because he could serve as a company man and an errand guy for Yankees general manager Brian Cashman. He was not hired for making managerial decisions or making the lineup card. This is questionable because manager means managing a game and knowing what players to use.

The Yankees display so much talent in their disposal that Cashman feels Boone doesn’t really need to manage. But in the postseason, decision making becomes part of the deal, and managers need to have a good eye of knowing when to take a pitcher out or what pitcher to use to be successful. The great managers such as Bruce Bochy and Terry Francona know how to do that, and that’s why both will be in the Baseball Hall of Fame one day.

As much as this is on Boone, this should be on the Yankees core players. It’s time for Aaron Judge, Gary Sanchez, Miguel Andujar, Gleyber Torres and other young starters to start playing like Mr. October. As in shining in the most important month of the season. They have done okay, but it’s not like they created memorable impressions the way Bernie Williams, Scott Brosius and Tino Martinez does it.

Those guys played enough time where they should have enough experience to play in October. If not now, when?

The Yankees should be fresh enough to play in October and do well as a result of an abbreviated season. This isn’t about grinding. This is about sprinting. This team has all the goods to do that at least.

If they can’t win a championship with 60 games, how can anyone trust them to win it all during a 162-game season?

Go ahead and cite the Yankees need to fail before they can succeed, but that cliche turns out to be worthless if they keep failing. Go ask the Knicks of the 90s how much this cliche really means.

Sooner or later, these guys either perform or they don’t. It could just be they don’t have that DNA in them to come through in October. The Yankees of the 90s made it so easy, but in reality, it isn’t. Those guys had it. It remains to be seen if these current guys do.

The time is now for them to perform. The Yankees are the team to beat. If they can’t win it all, when will they? How many more opportunities can they have to keep failing? This nucleus reminds me of the Cleveland Indians of the 90s where the talent was there to win it all but nothing to show for it.

There should be pressure on them. They played enough for so many years to learn through trial and error. There should be no more excuses. This roster features a healthy roster for the first time in a long time.

The Yankees acquired James Paxton last season to improve their rotation, and they followed it up by signing Gerrit Cole to win big games. They have everything that should make them favorites from the lineup to starting rotation to bullpen.

There should be no more excuses.