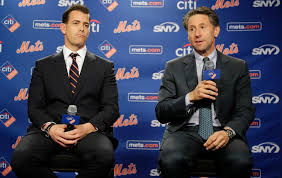 Brodie Van Wagenen may not be a great general manager, but he is not stupid.

The Mets general manager understands he may not have a third year on the job next season if the Mets are sold to hedge fund billionaire Steve Cohen or the triumvirate of Alex Rodriguez, Jennifer Lopez and Mike Repole. He gets it that new owners aim to please by hiring their own guy just to appease frustrated fans. The Mets could use a fresh look that features fresh ideas of building a baseball team.

Van Wagenen failed to make the Mets any better in his tenure here, and that makes him vulnerable as far as his job security goes. He did not make the Mets any better this past offseason. Sorry, but signing two starters who saw better days in Rick Porcello and Michael Wacha does not scare the Atlanta Braves and the defending World Series champion Washington Nationals. Neither does signing Dellin Betances in an attempt to make the Mets bullpen decent. Let’s not forget his questionable acquisitions of Robinson Cano and Edwin Diaz from last offseason.

Rather than hire Joe Girardi as the Mets manager, he decided to hire an unknown Carlos Beltran to manage. It turned out to be a flop since he was forced to resign after being involved with the Houston Astros illegal sign-stealing by using cameras in a dugout to pick up signs that would have them bang garbage cans to indicate what an opposing pitcher would pitch. Rather than hire Dusty Baker or a proven manager, he hired an unknown in Luis Rojas. Of course, he made both moves knowing that he would want to be involved in making up the lineup and managing the game.

Van Wagenen could not make a case for Cohen or whoever owns the Mets to retain him right now. For his boosters to say he and his staff drafted well the last two years, it’s good enough to get a cup of coffee as in it means it does not make that much of an impact now and it’s not a sure thing that those prospects would shine in the majors. Only a playoff series could save his job, but that may not be a sure thing.

Rojas shouldn’t be secure, either. If his boss is gone, he won’t get next season to manage. Not even the manager’s rosy outlook on the players and the team can save him.

The Wilpons made an interesting hire in Van Wagenen, a former-agent. He never had front office experience. He never paid his dues to be a general manager. His qualification comes from having a business and personal relationship with the current Mets owners, which most of his clients play for the team.

This hire turned out to be more of a comfort move with the Wilpons. They wanted to hire a general manager they can control, and they wanted to be more involved in baseball decision- making. When Major League Baseball told the Mets owners to hire Sandy Alderson as the general manager in 2010, they left the stage as a result of the Ponzi scheme mess they were involved in that had them losing money.

This troubled franchise needed a baseball guy to run the baseball operations, not a company man, and certainly not a slick used car salesman. It should be the first order of business by whoever owns the Mets.

Too much must go right for the Mets, and things never go right for them. Remember Noah Syndergaard is out for the season after undergoing Tommy John surgery. Yes, he underachieves as a starter by being so inconsistent on the mound despite his good stuff, but he eats up innings and he can mix in a great game once in awhile. It’s hard to trust Marcus Stroman since he is inconsistent and unreliable himself. Steven Matz may be the second best pitcher in the rotation, and he obviously will be the X-factor with his stuff. But the problem with Matz is he is also injury-prone.

There’s not much growth on this roster outside of Pete Alonso and Amed Rosario. There’s no athleticism on this roster, which is a must in today’s game. The Mets have a quantity of pitchers in the bullpen, but not much quality.

Van Wagenen played his salesman role well by hyping up his team’s roster, but it’s not going to matter much when the games begin.

He can only save his job if the Wilpons decide to keep the team. Don’t discount this possibIlity. I find it hard to believe Fred Wilpon wants out of Major League Baseball for good. He may not like owning the team, but he likes the perks and prestige of being an owner of a Major League Baseball team. For him and his son, it’s more about making money than winning.

It speaks less about the Mets when Mets fans are more interested about who will own the team in 2021 than the team in general this season.

This should serve as a hint that Van Wagenen should not feel secure about his job security.

He knows it, too, despite his Alfred E. Neuman approach.