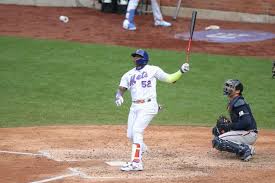 Caption: Yoenis Cespedes took a good look of the ball being gone

No Mets fan expected Yoenis Cespedes to be a hero on this Opening Day. Certainly not the Mets. Not even him.

When the Mets penciled him in the starting lineup as the designated hitter this week to play Friday’s game, there was no reaction whatsoever. He served as an afterthought. Pete Alonso, Jacob deGrom and Jeff McNeil piqued more interest than this forgotten Met, who served as a catalyst during the unforgettable Mets 2015 season.

The Mets hoped Cespedes could just play and avoid being injured. The Mets designated hitter seeked to find timing by playing.

Two years of him not playing baseball can diminish expectations.

But a funny thing happened. With the game scoreless and one out in the bottom of the seventh, it was Cespedes that hit the first home run of the game that would give the Mets a 1-0 lead over the Atlanta Braves at Citi Field. The score held up in the end as the Mets celebrated a 1-0 victory from an unexpected source.

It shows baseball can be a funny game when someone unexpectedly played the role of a hero. It makes the game great that way. Anyone can be a star on a given day.

For Cespedes, this was a long time coming for him. He needed that. For him to experience that feeling again, one has to feel good for him after what he has gone through. It’s no wonder why his teammates disregarded social distancing for a brief moment just to high-five and hug him when he entered the dugout after rounding the bases.

All that was missing was John Stearns screaming “The Monster Is Out Of The Cage!”. That was in reference to then-Mets coach screaming that quote when Mike Piazza got a hit in the 2000 National League Championship Series.

It’s been a long road for him just to get back after going through leg injuries and injuring his ankle after a reported run-in with a wild boar.

It wasn’t fun for him to not play and become a punchline in the process by the tabloids.

It’s too bad fans can’t attend games this season because of the COVID-19 pandemic. The fans would want a curtain call from him on this day, and he would have been happy to do so. That part of the element is going to be missed this season from a fan’s perspective and even a player’s perspective. The emotion and energy of a big moment makes this game so beautiful along with the pageantry that comes with it.

The lack of fans couldn’t dampen this moment for Cespedes. He appreciates every game as a blessing knowing he is fortunate to play. No one thought he would ever play.

Cespedes couldn’t have enjoyed hearing thoughts from fans about him milking his injury just to collect his money. Believe it or not, professional athletes have pride, and the last thing they want to do is collect money to do nothing. Not even Jed Lowrie is having fun being on the injured list again while he is collecting money, especially since he has yet to play a regular season game for the Mets.

Despite what fans think, players want to play and be a difference maker. They want to contribute. Cespedes is a proud man, and he certainly doesn’t want to be remembered on that note after what has been a good career for him.

There’s no question this is Cespedes’ last year with the Mets. Do the math. He is a 34-year-old player coming off injuries. For him, he is trying to show other teams that he can still contribute in Major League Baseball. On this day, he got off to a good start.

No one knows if he can keep hitting home runs this season, and no one knows if his body and knees can hold up. Every day will always be a day-to-day thing for him where he hopes everything goes right. He knows everyday won’t be like this. He knows there are bad days to come in a sport that can mentally affect players to deep slump.

Count on more stuff like him fouling out, grounding out and striking out often like he did in his first two appearances prior to the home run. He fouled out to the catcher in his first at-bat, and he grounded out to third in his second at-bat.

Still, no one can take this day away from him.

Be vowed about Jacob deGrom’s dominance of the Braves by pitching five scoreless innings and extending his scoreless streak to career-best 28 innings dating to last season, the longest active streak in the majors. Go ahead and be impressed with the moxie of Seth Lugo and Justin Wilson pitching out of jams. Love what Jeff McNeil did out there with the bat.

No matter. This day belonged to Cespedes. He earned the back page of the tabloids. He deserved all the love.

On this day, he did not play like an unexpected hero.

He played like a star that may still have much to offer.