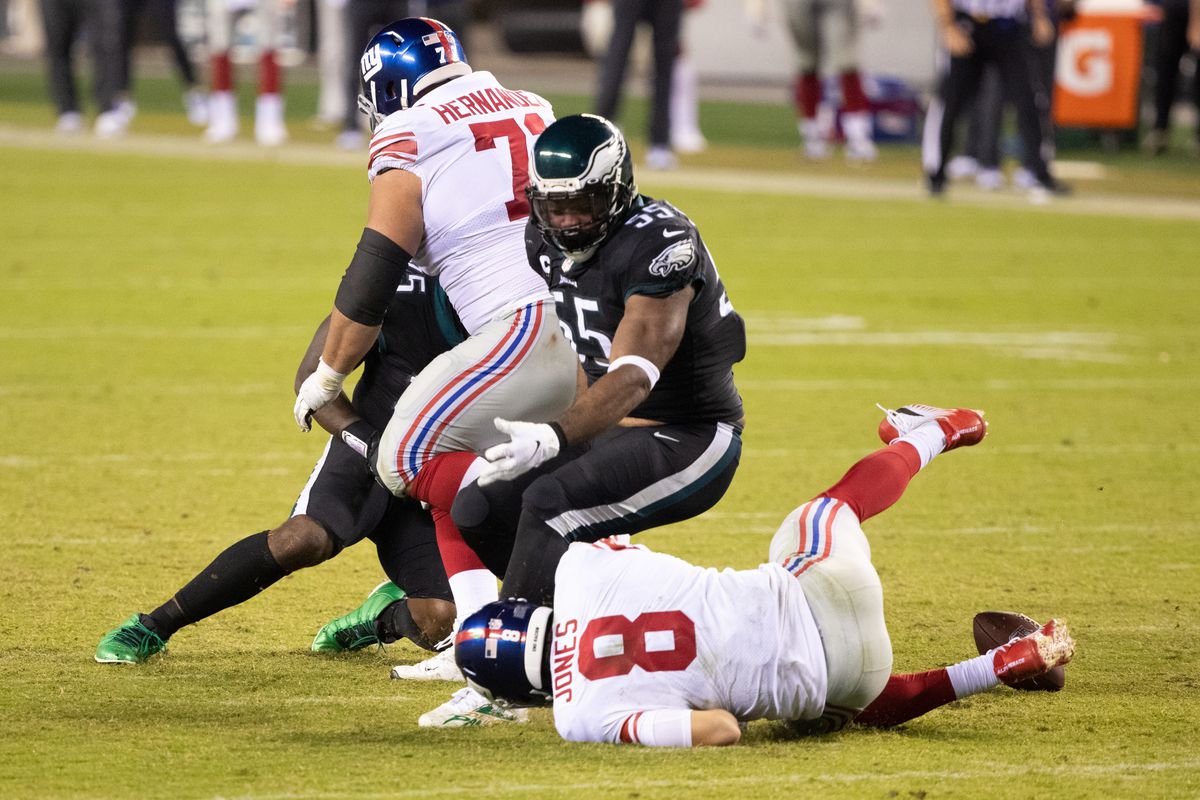 Who didn’t see this coming?

Giants fans knew better than to think their team would leave Philadelphia with a win. They saw enough to think nothing is official until the clock runs out at zero in the fourth quarter. They expected bad things to happen, and in a self-fulfilling manner, it did.

With less than five minutes remaining, the Giants took a 21-10 lead over the Eagles. The Eagles struggled to generate any offense against the Giants defense.

The doubts crept in when Eagles quarterback Carson Wentz threw a 59-yard pass to John Hightower at the Giants’ 14. Then, Eagles running back Boston Scott ran for six yards to be at the Giants’ 3. Wentz completed the four-play, 78-yard drive by throwing a 3-yard pass to Greg Ward and followed by running a two-point conversion, cutting the Giants’ lead to 21-16 with 4:38 remaining in the game.

One figured Giants head coach Joe Judge and his coaching staff would have the Giants run the ball to kill time. It worked when Wayne Gallman ran for three straight first downs. After Brandon Graham stuffed Gallman at the Giants’ 41, Daniel Jones decided to throw to Evan Engram on third down. He threw a nice bullet that Evan Engram bobbled, and the Giants punted instead of Engram catching the ball to run to the end zone and seal the win.

The Giants fans’ panic level turned into code red. They wondered how bad it would get. Oh, it would get bad, alright.

The Giants called a timeout to slow the Eagles’ momentum. It did not make the Giants fans feel better. They knew better to think the Eagles would slow down.

No one would blame Giants fans for shutting the TV off. Knowing the history of the Eagles stunning the Giants time after time, it would have been understandable.

For Giants fans that watch the ending, they were masochists. How else would one explain why they would watch what was about to come?

Scott ran for another four yards to keep the heartbeat going.

Then, Scott caught a touchdown pass from Wentz after a couple of Giants’ stops, giving the Eagles a 22-21 lead.

The Giants had one last chance to answer, but it ended on a Daniel Jones’ fumble, and that was that.

This meltdown against the Eagles was as bad as the Miracle at the Meadowlands or the Miracle at the new Meadowlands (DeSean Jackson) or Eagles kicker Jake Elliott kicking a 61-yard field goal to beat the Giants. The Giants come up with inventive ways to lose to the Eagles to the point you say that you can make it up. It’s no wonder why Giants fans anticipate a loss would happen.

How can the Giants say there’s progress? They can’t win winnable games. They rarely beat the Eagles. Their defense gives up big plays when it matters. The coaching leaves so much to be desired such as having Jones throw that pass to Engram when the Giants should have run out the clock. Their record against the Eagles and Dallas Cowboys stinks.

The Giants are likely going to be in the Top 10 in the NFL draft again, and they may be looking for a new general manager to work Joe Judge.

If there’s anything good about this loss, it would stop the Giants and their fans from being delusional about this team improving and maybe winning the NFC Least.

Of course, it does not address how the Giants can get better and improve.

There’s just no hope at this point after watching the Giants turn a thrill of victory into the agony of defeat against the Eagles once again.