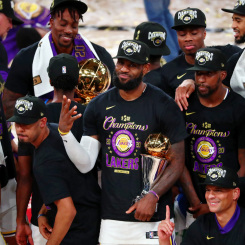 Basketball fans and critics compared LeBron James to Michael Jordan going back to when the high school prodigy became a revelation at St. Vincent-St. Mary High School in Akron, Ohio.

Think about how sick that is. The poor kid couldn’t even enjoy his time playing high school basketball without being harassed by media members and basketball fans who hyped him at the age of 14. To compare him to Jordan before he played an NBA game sounds so absurd that one couldn’t even make it up at the time.

James lived up to the hype as an NBA player. He is one of the best players ever to grace the league. The future Hall of Famer will present his speech at Springfield years after he retires. He continues to go on stronger at 35 years old, and he is coming off being a four-time NBA champion and a four-time NBA Finals MVP. He won’t rest until he matches or breaks Michael Jordan’s record of being an NBA champion, which is at six.

My money is on James to beat that. Why not? He keeps going strong, and players want to play with him. The Lakers offer that opportunity for him and any free agent recruit to win a championship. There’s a reason he signed with them a couple of years ago.

For the record, Jordan is better than James when comparing both in their primes. Jordan stands out in the sense he had a killer instinct and he can win on his own rather than rely on his supporting cast. But it does not and should not diminish what James accomplished.

I watched Jordan play. I appreciated his drive for winning championships. He cost the Knicks many championships, so there’s an appreciation for that out of respect. He rose to the occasion when the situation called for it.

I feel the same way about James, too.

Critics take it to a personal level, and it bothers me. It seems personal when fans compare Jordan to James. Most prefer Jordan since they hate James so much. Then you got James zealots pining him over Jordan since they worship their hero. Jordan’s enemies such as Bill Laimbeer and Isiah Thomas pick James to be the G.O.A.T. just to troll Jordan.

When someone talks about James’ accomplishment, critics talk about him losing in the NBA Finals often. No one lets him forget about his decision to take the talent to South Beach, which he won two championships for them and appeared in four NBA Finals. It’s like someone searches for a reason to attack James just to prove a point.

Nonsense like this makes people show unappreciation for James. Maybe it was understandable when James talked about wanting respect the other day.

Comparing James to Jordan turned out to be a tired act a long time ago. It just seems fans can’t accept James for who he is. They search and come up with inventive ways to degrade him.

James never asked to be compared to Jordan. No one asked him to be the greatest of all time. He wanted to play basketball and had fun with it. He enjoyed the game, and he enjoyed playing with his peers and going up against his contemporaries.

Nothing he does will be enough it seems. This is too bad. He brought some of this on himself with his decision to South Beach, but he paid the price and it’s past time we move on.

We should be celebrating James while we can. Instead, we find ways to diminish him.

James conducts himself with class. He showed courage by speaking out against the President. He participated in the Black Lives Matter movement. He talks about social issues and he aims to make the world a better place. That’s something Jordan didn’t want to do. There should be something to be said about that. In that sense, James is better than Jordan on this one. Instead, we rip him for that.

It says more about us than James here.

We serve as a problem. We fail to appreciate James for not being Jordan. We can’t accept him no matter what. We compare NBA players to Jordan, and then even if a player like Kobe Bryant or James are like him, it’s not good enough.

It was a cute bar story at one time comparing James and Jordan.

It’s all our fault.