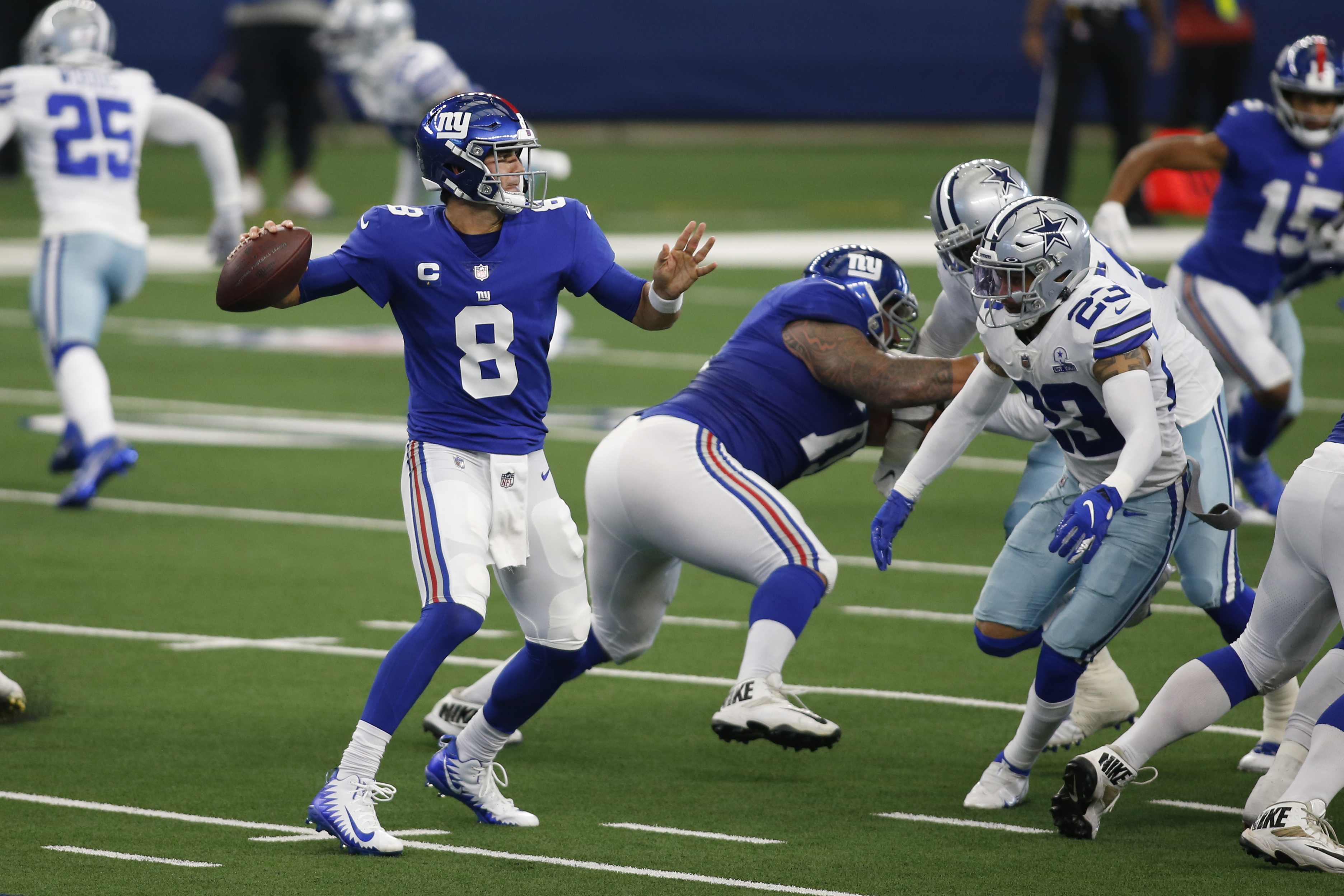 Dallas Cowboys quarterback Dak Prescott departed from the game with a right ankle injury in the third quarter. He injured his ankle after a 9-yard run while being tackled by Giants defensive back Logan Ryan. He could be lost for the season.

Enter Andy Dalton. The Cowboys signed him as a backup quarterback and for insurance this offseason, and he delivered for them that Daniel Jones couldn’t for the Giants on Sunday afternoon at AT&T Stadium. He won a winnable game, unlike the Giants quarterback.

Dalton engineered a four-play, 72-yard game-winning drive with 52 seconds left by throwing a 19-yard pass and a 38-yard pass to Michael Gallup, setting up Greg Zuerlein to kick the game-winning field goal with three seconds left, giving the Cowboys a 37-34 victory.

When watching Dalton operate that drive like John Elway, I said to myself why the Giants didn’t sign him or a competent backup quarterback like Joe Flacco this offseason. They needed to sign either one so that Jones can earn the starting quarterback job, not be handed the job.

Don’t mention Colt McCoy as a capable backup because he is not a starting material. Giants general manager Dave Gettleman knew what he was doing in signing him since he would not be a threat to Jones. Gettleman has such an ego that he is determined to give his starting quarterback every chance to succeed just to show he made the right choice in drafting him. He sent a terrible message to his players and Giants fans that he is not about winning right there. This is about him making a point.

Jones continues to make Gettleman look like a fool with the losing and interceptions. Once again, he bombed in a big spot. He had a chance to give the Giants the lead, but he didn’t get it done. He went three and out on the last drive. He couldn’t even take the Giants in field goal range. He desperately needed this moment, and he could not come through. He ended his day by not throwing a touchdown for the fourth straight game, and he failed to throw a touchdown since he threw one to Darius Slayton in the fourth quarter of his first game of the season

Every game and every loss make Giants fans sour on Jones. They are tired of hearing about his potential. This franchise has been awful since they last won the Super Bowl. They want hope in the name of actual wins, not moral victories every Sunday as Giants head coach Joe Judge preaches after every loss. No one can blame them when the franchise is an NFL-worst 12-41 since the start of the season.

We can make excuses for Jones such as a lack of an offensive line and dearth of playmakers, but no one wants to hear it. A quarterback must find a way to overcome it. That’s how you measure if a quarterback is great or not. Right now, Jones offers nothing to think he can be the guy if he needs everything to be just right and perfect for him to do well.

The way Jones is playing, he should be benched. He would have been benched by now if the Giants had a competent quarterback waiting in the wings. Gettleman made sure this was by design that they did not get one.

Right now, Jones needs to take a deep breath and clear his mind. He looks like a lost soul out there. He could use a break just to think about what he is doing wrong. He could learn from watching a competent quarterback like Dalton.

Gettleman did Jones a disservice by not signing a veteran that could mentor him. McCoy offers nothing since he is not even a quarterback material these days.

Now either Jones figures it out fast or he will not be the Giants starting quarterback next season. He could cost Gettleman his job, and the new Giants general manager could find someone else rather than entrust the quarterback position to Jones. The new general manager has no ties to Jones for him to play him.

Jones can’t keep falling forever. He can’t keep being on scholarship for life.

The only good thing about Jones not losing his job right now is he is putting himself in a position to erase no doubt he is not the guy.