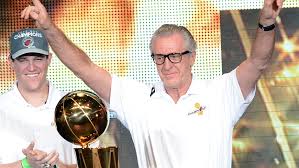 How many of you Knicks fans of the age of 30 and below even know Heat czar of basketball operations Pat Riley once coached the Knicks in the early 90s? Odds are you probably don’t, and you are forgiven if you don’t. It’s been such a long time since Riley coached and bailed on the Knicks. He served as the final vestige of what was great about the Knicks.

As soon as he left in 1995, the Knicks deteriorated to irrelevancy years later, and they have never dug themselves out of the hole. They are once again rebuilding for a better tomorrow and hoping to get a player like Giannis Antetokounmpo as a free agent to get back to relevancy.
‘
Meanwhile Riley gets the last laugh as his Miami Heat will play in their sixth NBA Finals appearance Wednesday night against the Los Angeles Lakers.

Yeah the Knicks played in the NBA Finals once in a shortened season in 1999, and they beat Riley’s Heat in the playoffs several times. No matter. Riley once again comes out on top. Then-Knicks president Dave Checketts and then-Knicks general manager Ernie Grunfeld never experienced much success again after that.

RIley won three championships with the Heat as an executive, and one as a coach. His latest accomplishment may be his best yet. LeBron James left the Heat to go home and play for his hometown Cavaliers in an attempt to create his own legacy by winning a championship on his own for a city starved for a title. This meant Riley needed to rebuild the Heat all over again.

He drafted well over the years such as drafting Tyler Herro, Bam Adebayo, Duncan Robinson and Kendrick Nunn, and his faith in Erik Spoelstra as Miami Heat coach to lead the team to rebuild paid off. His work convinced Jimmy Butler to sign with the Heat to be the final piece of being an NBA title contender.

Here’s how apathetic we are to the NBA in town: We can’t even muster any hatred toward Riley and the Heat since the Knicks are so bad for us to get worked up. Another reason why the former Knicks great coach gets the last laugh on the Knicks and their fans.

Maybe the Heat won’t win the championship this year, but they put themselves in the position to win one soon. It could be they get Antetokounmpo instead of the Knicks. It would be another dagger Riley put on the Knicks if that happens.

At this point, all Knicks fans can do is admire Riley for his greatness. He keeps going on strong, and he shows no sign of letting up ever. He may just keep haunting the Knicks as long as he is alive.

For my money, Riley is the best coach and executive ever. His work with the Knicks turned out to be exemplary, and for him to keep going on strong at his age is impressive. He knows what he is doing. He has such a great feel for the game when it comes to player development, winning, toughness and building a team.

The Knicks bet on Riley flopping as an executive when he left to run the Miami Heat operations in 1995 via fax. After all, coaches turned executives don’t often work out. Just the Knicks’ luck, Riley shined.

Even if it appeared like the wise move on the Knicks’ part, it really wasn’t. You don’t lose a guy like Riley to anywhere after what he has meant to the franchise. When Riley came to the Knicks, he brought credibility, swagger, identity and smarts. He made the Knicks great just taking the job. Everyone feared playing the Knicks, and that included Michael Jordan’s Bulls. The Knicks became a must-see TV in town during the time he coached them. In fact at one time, they were more popular than the Yankees, who were in the process of building a dynasty.

Grunfield and Checketts won nothing before Riley arrived. They may think they saved Knicks basketball, but they did not. They let Riley go because they thought they did not receive credit for the team’s success, so this was a power move by them. It did not work out in the end. If Riley never left, would we even have Dolan trying to play savior?

The Knicks got what they deserved, and they are still paying for it 25 years later with Riley building his team to another NBA Finals appearance.