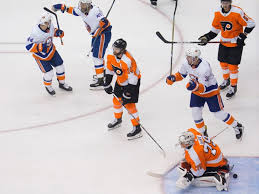 The Philadelphia Flyers searched for a goaltender ever since Pelle Lindbergh died in an unfortunate car crash in 1985. They lacked a goaltender who could win them the Stanley Cup when they contended in the late 90s. They haven’t had a goaltender like Lindbergh.

The Flyers hyped up Brian Boucher and Roman Cechmanek as the goalie savior, but they flopped under the pressure and were never heard from again. Now, Carter Hart gets a chance to be that guy. With the stakes getting higher, spotlight focuses on him to lead the Flyers to win the Cup for the first time since 1975.

After dominating the Montreal Canadiens in the first round, Hart faced a tough test in the New York Islanders to start the Eastern Conference semifinals. He played more like Henrik Lundqvist, Boucher and Cechmanek than a star on this Monday night. He gave up a couple of softies in the third period that put the game away for good in the Islanders’ 4-0 victory over the Flyers at Scotiabank Arena in Toronto.

To be fair to Hart, he played excellent for the first two periods of the game despite the Islanders leading 1-0. The Islanders could have made this a 3-0 or 4-0 game after the first period with the saves he made. He kept the team afloat as he could in the second period, but his teammates could not score a goal.

Too bad for the kid. But he knows full well he can’t be giving up softies for the Flyers to beat the Islanders. Scoring will be at a premium against these Islanders, so his play will be scrutinized even more. He has to give the Flyers a chance by playing well in this series. He did not get it done, and he wasn’t as great in the third period as he was in the first two periods to avoid the blame.

Yes, Hart wasn’t the problem, but he wasn’t the solution, either. He cracked under pressure when the Flyers needed him in the third period.

Great goaltenders find a way to steal a game. Maybe Hart does that in this series. On this night, he didn’t get it done. Islanders goaltender Semyon Varlamov did.

Varlamov faced as much pressure as Hart. He knows the Islanders will rely on him to do well if they want the Stanley Cup. He outplayed Capitals goaltender Braden Holtby in the first round, but he has to show his worth against Hart. On this night, he did.

The Flyers peppered so many pucks at Varlamov in the second period, and he made saves after saves. He stopped 29 shots to earn back-to-back shutout in the playoffs.

It wasn’t like the Islanders goaltender had it easy as his counterpart. He couldn’t make any mistakes, either since he knows his counterpart can steal a game on his own from watching him play this season. He had to hold the fort with the Islanders clinging to a 1-0 lead in the third period with Hart playing well for the first two periods.

Varlamov tends to give up a soft goal of his own. So far in the playoffs, he hasn’t. Of course, people will still question him because of that unless he hoists the Stanley Cup.

Everyone wondered if Varlamov would break in this game. It has to happen sooner or later for him, right? Not on this night. It was Hart that broke down in the third period.

Jean Gabriel-Pageau shot the puck that Hart should have caught. It went in, and the Islanders took a 2-0 lead in the third period.

Anders Lee received a pass from Mat Barzal and shot the puck in that Hart lost track, making it a 3-0 game, and that goal proved to be a dagger.

The fourth goal was not Hart’s fault. This was on Flyers coach Alain Vigneault taking his goalie out in a desperate attack to get an extra attacker to score a goal, and it burned him when Devon Toews shot the puck out of nowhere and it landed in the net.

Damage was done. Hart took the loss along with his team. He earned the loss by being outplayed by Varlamov.

Flyers fans faith on Hart won’t waver on this loss. He earned the benefit of the doubt.

More games like that, and everyone will wonder if Hart is just another Flyers goaltender who struggles under pressure.