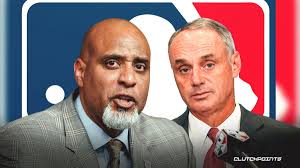 Reports surfaced all week it does not look good between MLB owners and MLB Players Association when it comes to opening up this season.

Owners sought to have a 40 or 50-game season despite paying prorated salaries while the players expressed desire to play 114 teams while being paid the full amount. Both rejected each other’s proposals, and they seemed intent on sticking to their position.

I haven’t thought much of it. Either because it may be posturing at best or maybe I really just don’t care. Each day, I keep learning towards the latter on what happens between the MLB owners and MLBPA. If they reach an agreement, great. If they don’t, life goes on.

More and more, I sense fans feel the same way. Sure, some baseball fans will be disappointed and even upset, but the casual fans couldn’t care less if there is no season. Why would they when the NBA, NHL, WNBA and other sporting events will take place? Who needs baseball? Certainly not me.

At the 11th hour, both sides will have to reach an agreement, no? They know they have more to lose than to gain for not having a season. If there is no season this year, baseball may have lost everyone for good. Bad enough no one cares about baseball as it is. Look at the low TV ratings and lousy attendance. This should wake the owners and players up. It would be surprising if there is no season.

With the pandemic and economic downturn, the last thing fans want to hear is billionaires and millionaires not agreeing to a deal and negotiating through the media. The owners and players know this, too.

Baseball continues to struggle to be the nation’s top sport ever since the 1994 strike. Yes, Sammy Sosa and Mark McGwire attempting to break Roger Maris’ single-season home run record caught everyone’s attention in 1998. Baseball received a huge spike from that, but now that died down a long time ago.

Most people knew more about Sosa and McGwire than they know more about Mike Trout right now. Trout is baseball’s best player right now, not to mention he is a highlight reel despite playing his games out on the West Coast, yet for no one to even know who he is should be alarming. It speaks poorly how badly baseball promotes its sport.

Baseball games tend to be long for the average kid to even watch. Even longtime fans grew tired of watching five-hour games when managers change pitchers late in games for matchup purposes or teams like the Yankees and Boston Red Sox foul off so many pitches to keep getting more at-bats.

There’s nothing about baseball that appeals to the younger generation the way football and basketball does, which it’s fast-paced and entertaining. Baseball tends to put people to sleep the way soccer can.

People think of baseball as a regional sport now since it does not capture America’s attention the way the NFL and NBA do. Even college football gained more popularity than baseball. With 162 games in a season, the casual fan tends to be worn out after a long season, so he or she won’t bother watching a team in the postseason that they don’t root for.

Baseball features stupid archaic unwritten rules that demands players to respect the game whether it’s not to show emotion or not running up the score or stealing bases when the game is out of hand.

It does not help baseball does not have a competent commissioner in Rob Manfred, who is overmatched at his job based on him not suspending the Astros players for their role in cheating when it comes to electronic sign signals or the fact he looked at the World Series trophy as a piece of metal rather than a sacred trophy that played worked hard for all season. He does not know how to promote the sport, and he does not look at it as a priority. He has been unheard from during the coronavirus and George Floyd’s death.

Fans also know owners selected Manfred to do their bidding rather than making the sport fun and entertaining.

With the lack of urgency Manfred showed in trying to reach an agreement with the players, one wonders if he wants the season to start. There are a good portion of owners that would shut down the season for a long time. That’s what baseball goes up against.

Players never will get the benefit of the doubt with the fans. Not when they are rich and properly taken care of. When Blake Snell makes idiotic comments about it’s not worth playing with a reduced salary.and that he needs his money, he comes out of touch with fans who are out of work through layoffs and furloughs. When Max Scherzer and Scott Boras talk about players should not give in to owners or accept pay cuts, they encourage fans to tell them to take a hike.

Owners and players alienated baseball fans a long time ago. Neither care about the fans. At least, the players publicly admit that they are independent contractors and they play for themselves. The owners like to say they are all for the fans just so they can get their money.

Baseball fans grew tired of both sides. If there is no season, they will move on. The diehards will be disappointed, but the rest will move on.

The NBA could consider starting its playoffs in the summer for good if it works out this year, which the league could move its season in December rather than starting in October.

If the NBA battles Major League Baseball all summer long, it will be baseball’s death sentence, which no one will watch baseball.

Something MLB and the MLBPA should consider long and hard before both want to cancel the season this year.