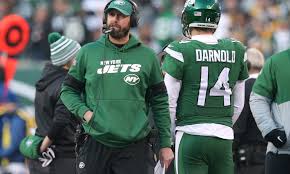 New Jersey Gov. Phil Murphy did Giants fans and Jets fans a favor this season by not letting anyone see their respective teams at MetLife Stadium. It may be the governor’s highest point of his tenure considering both teams stink to start the season by being winless. It’s just another September that both teams played themselves out of the playoffs. Not that either of them was making it this season.

After watching another Jets stinkfest on Sunday afternoon, Jets fans should be fortunate not to pay up to watch this garbage this year. Not that they planned on renewing season tickets or going to the games. They knew the deal. Their team would not be good with the team admitting they are rebuilding by not adding playmakers to improve this season. Plus, Jets head coach Adam Gase’s incompetence does not inspire fans to care at all.

The Jets stunk for the second straight week to start the season after a 31-13 loss to the NFC defending champion San Francisco 49ers in the Jets home opener. The offense put on an offensive performance and the defense allowed 359 yards, especially when 49ers running back Raheem Mostert ran for an 80-yard touchdown run on the first play of the game, giving the 49ers a 7-0 lead that they would not relinquish the entire game. The coup de grace arrived when 49ers running back Jerick McKinnon ran for 55 yards to execute a third-and-31 conversion in the third quarter, resulting in a Robbie Gould’s field goal that would extend the 49ers’ lead to 24-3.

18 games into Gase’s tenure, and Jets fans wonder what bumbling Jets CEO Chris Johnson sees in his head coach that they don’t see. This head coach failed to create a good offense or utilize his playmakers. Jets quarterback Sam Darnold gets worse each passing game. The Jets haven’t been competitive, and his team gets outcoached every game.

It’s remarkable Gase somehow won seven games as Jets head coach last season. They play like a team that won only four games under him from watching a team that is coached by him. Even when they won seven games, they stunk. They can’t tackle, score and entertain.

Johnson will not admit it, but he has to feel like he has a buyer’s remorse about his head coach. He believes in him since this was his hire and he doesn’t want to pay his guy to sit at home by firing him. But if it gets worse, he has no choice but to fire his coaching choice. By retaining Gase, he enables the incompetence of an overmatched head coach and he would come off as an owner who doesn’t seem to care much about the fans or the team in general.

Yes, firing a head coach won’t make this team any better this season, but at least there would be accountability. Most importantly, Johnson needs to know if Darnold can benefit without Gase being around to coach him. If the Jets somehow get the No. 1 pick in the NFL Draft, they are likely to move on from Darnold and draft Clemson quarterback Trevor Lawrence, pegged as the best quarterback in the draft.

But before they make a decision like that or be in a position like that, they need to see more of Darnold. No one knows what he is at this point. It does not appear to look good, but to be fair to him, he does not have a good offensive line or a playmaker to be effective. His coach failed to put him in a position to succeed.

Maybe no one makes a difference in the end, but the Jets must find out. It’s better than doing nothing. For Darnold’s sake, the Jets owe it to him to make the decision before they give up on him for good. It may work or it may not work. Odds are it may not work, but the Jets have nothing to lose firing Gase. It can’t get any worse than what we are seeing now.

Darnold played awful on Sunday. He struggled to throw, and his footwork could use work. He served as a punching bag for the 49ers defensive line. I felt sorry for him just watching him play.

It could just be Darnold may need to move on where he can play to his potential. It may be he is not an NFL caliber quarterback. But before the Jets dump him for good, they need to see if he can be salvageable with an interim coach that will let him run a no-huddle offense and call his own plays.

It’s obvious Gase can’t coach Darnold. Why else would he go for a field goal when the Jets trailed 24-3 with less than three minutes left in the third quarter on 4th and goal from the 49ers’ 7? How does a field goal make it any better? By going for the field goal, he handcuffed his quarterback from trying to make it happen by throwing a touchdown pass. How will his young quarterback get better by not going for it?

If he can’t trust Darnold, it shows he has not done his job of coaching him to be a productive quarterback in the NFL.

Gase coached Ryan Tannehill once with the Miami Dolphins, and Tannehill bombed as a quarterback running Gase’s offense. Now, Tannehill shines as a Titans quarterback. Maybe the same thing can happen with Darnold with an interim coach.

The Jets play 12 more games this season. They need to make the most of it by firing Gase and see if an interim coach like Gregg Williams can salvage the season by winning games and letting an offensive assistant unlock Darnold’s potential.

Keeping Gase right now serves as a waste of time for everyone involved. He likely will be unemployed after this season since it would be a hard sell to bring him back after an awful season. Why keep this charade going?

Gase coached the Jets for 18 games, and all 18 games turned out to be brutal to watch, even when the Jets were winning. This gets a coach fired right there.

With a quarterback playing like a hot mess right now, only firing Gase can save Darnold from being a bust.