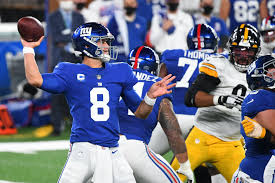 Instead, he couldn’t seize the opportunity to be the guy by playing like a star like his counterpart Ben Roethelisberger did in leading the Steelers to a 26-10 victory over the Giants at MetLife Stadium.

All of this makes it amusing that the Giants fans and a Giants beat writer for the Bergen Record anointed Daniel Jones a star never mind he did so much losing than winning for the Giants last year. He cost Pat Shurmur his job as Giants head coach by throwing interceptions and fumbling the ball. He played a role in making Joe Judge a loser in his Giants coaching debut.

When it mattered in a tight game, Jones could not deliver once again. Once the game got out of hand, the Giants quarterback threw a garbage-time touchdown to Darius Slayton with a two-point conversion to show for it.

Jones threw two interceptions, and most of the night, he looked skittish and scared to throw.

He threw so many one-and-outs in the game that it was hard to count. He did not have his unit on the field or keep the offense moving the way Roethlisberger did in the second and fourth quarter of the game.

The second-year quarterback played like a pedestrian quarterback than a dynamic quarterback. This is not what the Giants want out of him in his second year. They expected him to put on an explosion of emotional and statistical fireworks on Opening Night.

Instead, Jones displayed lack of accuracy, horrible pocket awareness and plenty of indecisiveness. Here’s what galling: He never displayed a hint of anger of not getting it done. How about playing with a sense of urgency in the first game of the season? How about making an impression to a new head coach that he can be the guy that makes him a Giants coach for a long time?

In New York, no one wants to see a quarterback shrug. It worked for Eli Manning, but he also did a lot of losing here that people fail to neglect. His two Super Bowl championships earned amnesty.

Of course, Judge and his teammates did not call Jones out. Jones seemed indifferent about his awful play after the loss.

Maybe that’s a problem. Jones likes to think he is still a rookie quarterback and that he still has so much to learn. The coaching staff, the front office and his teammates leave him alone just because they don’t want to ruin his confidence. Call this coddling, and it has to stop.

Accountability must replace coddling now. It’s the only way Jones will get better. Some tough love could be the tonic to his problems. Something has to be done. It’s not fair for his teammates that are grinding and he gets treated with kid gloves despite his failures.

This is Daniel Jones’ team. The buck stops with him and no one else. That’s the life of an NFL quarterback. With glory comes responsibility.

I see more of Dave Brown than Phil Simms in Jones. Good but not great. Just an average quarterback. The Giants won’t be moving forward as a franchise unless Jones grows up as a quarterback.

Jones experienced one good moment, and that was his NFL debut against the Tampa Bay Buccaneers. He engineered a comeback by operating a drive that helped the Giants beat the Bucs, 33-31, on his seven-yard touchdown run. Of course, Buccaneers coach Bruce Arians earned an assist by icing his own kicker to eventually miss the field goal that cost the Bucs to win.

Since then, he offered nothing. Being a rookie can only go so long. At some point, it’s time for him to grow up.

This could have been a winnable game for the Giants had Jones played better. The Giants defense did all it could to keep the team in the game. Jones played them out of the game.

The Giants can’t let it continue to happen. Either he plays better or the Giants may need to search for another quarterback. He can’t be on scholarship anymore. This is the NFL. Either perform or lose the job.

I never was enamored of Jones. He strikes me as a pedestrian quarterback. He will vow you maybe once or twice, but he will always disappoint. This has been his game for a long time. I questioned the pick at the time, and I saw nothing to think he would be a franchise quarterback.

Opportunity presented itself for the Giants quarterback, and he shrank after throwing an interception to Cameron Heyward as a result of being hit by Bud DuPree. This occurred during a 19-play drive in the third quarter. He should have thrown the ball away. He had no shot of throwing it to his security blanket in Slayton. It’s fundamental 101 right there. What was he thinking? That decision negated a touchdown drive or a field goal opportunity. Instead, it became the turning point of the game that had the Steelers winning the game.

We don’t really know if Jones can be that guy despite Giants fans believing in him. Only his play will tell the answer.

On this Monday night, he raises more questions about whether he can be the guy.

His play deserves criticism more than coddling now that he is not a rookie anymore.

Am I right on or too harsh on Jones? Email me at: lesliemonteiro97@gmail.com