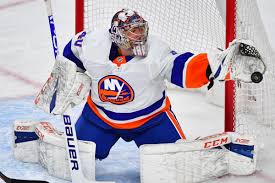 One of Barry Trotz’s strengths as a coach is his ability to go with his gut when it comes to utilizing players. When he puts them on a line, he is doing so to allow the team, as well as them, to be successful. Such as Mathew Barzal and Anthony Beauvillier in the play-in series against the Florida Panthers, or putting them on the ice for defense or picking who to start as a goaltender.

Trotz started Semyon Varlamov as his goaltender against the Panthers. For me, it was a surprise in a sense that Thomas Greiss showed he can win playoff games when it matters unlike his fellow goalie teammate. But Varlamov rewarded his coach’s faith by being competent. We say competent as in decent because he didn’t have much work as a result of the Islanders defense stealing the puck and shadowing the Panthers stars.

The Islanders can’t look back now. They have to rely on Varlamov to beat the Washington Capitals in the first round. If they go further, he will make or break the Islanders’ chances of winning the Stanley Cup.

The Islanders hope the defense will play good enough that he can get by. That’s dicey. The Capitals feature so much firepower on offense such as Alexander Ovechkin, T.J. Oshie, Evgeny Kuznetsov, Ilya Kovalchuk, Carl Hagelin among others for the defense to keep up. In other words, the Islanders need Varlamov to make that rare, occasional save. He is not going up against a one-line team in the Florida Panthers anymore.

Can he do it is another question. He can be a headcase. When things go right, he’s fine. When things go bad, he’s not in the right frame of mind. If he gives up a bad goal, he tends to wallow in self-pity. I saw him blow leads easily, and I see him give up bad goals that turn into an avalanche for his team to overcome.

Varlamov performed efficiently this season. He did not really give up that bad goal, and he played like a reliable goaltender. Still, there always will be doubt about him because of his history. He blew leads of 2-1, 3-2 and 4-3 in Game 7 of the 2014 first-round playoffs that cost the Colorado Avalanche the series against the Minnesota Wild. In the 2010 first round playoffs, he was the goaltender when the Capitals blew a 3-1 series lead and lost to the Montreal Canadiens in Game 7.

Islanders goalie whisperer Mitch Korn can say all the right things to his goaltender, but when the game starts, Varlamov must perform, and Korn can’t do it for him.

The Capitals don’t fear him, and they shouldn’t. They know who he is since he played for them, and he also melted down in big games for them come playoff time. It’s on him to change the narrative. The Islanders need him to steal a game or two because the Capitals know they can rely on Braden Holtby to do it.

He gets another opportunity to do so, but how many more chances can he get? If he doesn’t get it done this year, he never will. The playoffs serve as a referendum for him to show he can be the guy.

Sorokin could start as early as next season. The Islanders signed him to play for them a few weeks ago, so Varlamov knows he will get only one shot to show he can get it done.

Who knows if Varlamov feels the pressure or not? He talks and behaves like he is unflappable, but that does not mean much. It’s how he is when he is on the ice in a big game. It’s human nature these blown leads stick with him. This happens time after time with him, and he knows it, even if he denies it.

Challenge comes to him starting Wednesday. He would be wise to make an impression in this game. Every game should be something to prove for this enigmatic goaltender. He knows a bad game will cast doubt on him, and it could be that Trotz can replace him with Greiss to change the momentum and narrative of this series.

Varlamov is only as good as his last game. In this case, he didn’t have to work much.