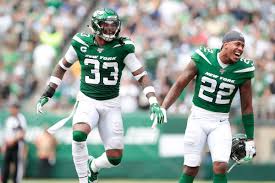 The best part about the Jets trading Jamal Adams to the Seattle Seahawks on Saturday is he and his drama are gone. No one on the Jets doesn’t have to answer questions about him and deal with the circus that constantly permeates this organization.

They could have received nothing in return for this disgruntled player, and it would have been a success. He just had to go away because he did not want to be with the Jets. He made that clear with his behavior by ripping the organization on Twitter and Instagram this offseason. He greased the skids for his departure when he called out Jets owner Woody Johnson on Twitter last week for allegedly making inappropriate remarks about African-Americans and women to diplomats during his time as Donald Trump’s ambassador to the United Kingdom.

For the record, the Jets received next year’s first-round pick and third-round pick, 2022 first-round pick and safety Bradley McDougald from the Seahawks in return for Adams and a 2022 fourth-round pick. Be impressed with Jets general manager Joe Douglas for pulling this one off. This is the best he could have done, and he knew it, so he did not bother creating a bidding war for his petulant player. He understood that getting much for a safety is unheard of. He even had to be surprised how desperate the Seahawks were to acquire Adams’ services.

The Jets would stink this season with him, and they can stink without him. They just wanted him gone as much as he wanted out. It never would work, and by him continuing to be narcissistic, it would create more headaches for beleaguered Jets coach Adam Gase, who knows he is coaching for his job this season.

Even if the Jets made him the highest paid safety in the National Football League, he would have been unhappy. Douglas and ownership knew this, which explained why they wisely did not bother offering him a new deal despite two years left on his contract.

Adams expressed no interest in turning the franchise around. He knew it would be a waste of his time, and he did not want his career being wasted with the Jets. He was hellbent on leaving, and he got his way the way Bill Belichick did in going to the New England Patriots as their head coach in 2000 after resigning as the “HC of the NYJ” after one day at the job.

The Jets trust Douglas to get it right mainly because of his excellent scouting background from his days with the Baltimore Ravens. That’s all well and good, but it does not change the perception of how lousy things are within the Jets organization. The problem starts with the culture, which is toxic as it gets.

For Adams to get his way by being narcissistic, it speaks poorly as a Jets organization along with him. This represents an organization failure as much as him.

Everything ends badly for anyone that works for the Jets it seems. Just ask Darrelle Revis, Muhammad Wilkerson, Keyshawn Johnson, Herman Edwards, Eric Mangini, Tim Tebow, Belichick and so many disgruntled Jets employees. This starts at the top. Johnson serves as a constant to everything that has gone wrong under his ownership.

Outside of two AFC championship game appearances, Johnson has been a failure as a Jets owner.

If allegations are true concerning Johnson about African-Americans and women, the NFL must force him to sell the team. He can’t get credibility back in a league that employs African-American players.

This troubled organization could use an owner who has a clue about football. There’s no guarantee the next owner will be a success, but we saw enough of Johnson to know it’s never going to get better. He owned the Jets since 2000 with not much to show for it.

When players leave unhappy and when players complain about how the organization is run, it’s a terrible look for Johnson and the Jets.

While Adams behaved like a child, he is not exactly wrong about this organization. The Jets fans know all this. Most NFL players know it, too. Why would anyone want to play for an organization associated with failure?

If the Jets ran like a competent organization, maybe Adams would not have acted that way. Again, we are not saying the Jets safety was right for what he did, but he raised awareness of everything that goes on in the organization. He did the fans a favor whether the Jets fans like it or not.

As long as Johnson operates the Jets, nothing will change. No matter how great Douglas does, the Jets will always be a running joke because ownership will find a way to screw things up.

Remember this is the same owner that actually thought keeping Rex Ryan was a great idea after then-general manager Mike Tannenbaum was fired. No candidate would take the Jets general manager job without hiring his own coach, which is something Johnson could not understand remarkably. Instead, he settled with John Idzik as the general manager, and predictably, it fizzled. Not only Idzik failed as a general manager with his draft picks, but he apparently decided to sabotage his own team by not spending money in free agency in an attempt to get Ryan fired just to hire his own coach. Johnson’s decision set the franchise back that it has not recovered since.

Douglas can do a victory lap, and Jets fans can be ecstatic. But remember something: As long as Johnson is around, the problems won’t go away.

Someday, there will be another player that will pull a Jamal Adams on this franchise because ownership and management can’t get it together.

Here’s the bottom line: No one came out great in this trade, even if it appeared the Jets and Adams got what they wanted.