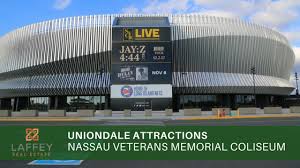 This turned out to be a surprise Tuesday. Maybe it shouldn’t be with the Islanders’ awful history of playing in their renovated arena in recent years.

Mikhail Prokhorov’s Onexim Sports and Entertainment decided to shut NYCB Live’s Nassau Coliseum down indefinitely while Prokhorov finds investors to take over the lease of the arena and assume the remaining $100 million in debt. This means the Islanders will no longer play their home games there. It’s on to Brooklyn for good.

This stinks since the Islanders planned to play all their 41 home games at the Coliseum next season on their way to playing at Belmont in the 2021-2022 season. Instead, the Islanders will play out their season away from Long Island at Barclays Center.

You can’t make this up. Once again, a professional hockey team will play the role of a nomad next season in an arena that doesn’t really want them anymore. The owners of Barclays Center tried to evict the Islanders at one point since the arena did not make money out of hockey.

The Islanders are better off playing 82 road games next season than play one more game at Brooklyn. They can get a practice of it now since they will play their playoff series against the Florida Panthers in the best-of-five during the qualifying round at Las Vegas if the season resumes.

Yes, the Islanders post a 85-48-21 lifetime at Barclays, but the players hate playing at that arena, and the fans hate going there. Hockey players tend to be creatures of habits, and taking a train from practice on Long Island to play home games at Brooklyn makes it an non ideal situation. It may seem lame from a fan’s perspective, but from a player’s perspective, it makes sense since they want everything just right before they get ready to play on game night.

The ice at the arena is awful. Who can not forget Scott Mayfield slipping and falling on the ice when he attempted to score a goal in Game 2 of the Eastern Conference semifinals last year? How about the arena being so dead for the Eastern Conference semifinals last year for the first two games? The Islanders played off the crowd by which they played flat because the crowd was disinterested to put it bluntly, and that played a role in them being swept by the Carolina Hurricanes in four games last year. Remember the Coliseum’s dimensions helped fans be close to the action, which is not the case with the arena in Brooklyn.

The Eastern Conference semifinals played a role in making Barclays Center as a turnoff for good. I rather not see the Islanders play one minute there. I will take it to my grave that if the Islanders played the Hurricanes at the Coliseum last year, it would be a different outcome. The players and coaches that work for the Islanders feel the same way, but they won’t say it publicly.

Let’s be honest about Barclays. It’s a dump. It’s not even our dump. It’s just a terrible arena that lacks charm. The arena was not meant for hockey, and no one had any idea the Islanders would consider even playing there when the arena was built.

Yes, the Brooklyn arena kept the Islanders in New York rather than be in Kansas City or Quebec or Las Vegas, but that only goes so far. The fans in Brooklyn couldn’t care less about the NHL, and the hipsters (do they still exist?) rather drink craft beer at dive bars  in the city than go to a game. The arena is simply not feasible for hockey, and the commute is treacherous for a team.

Only the Islanders can go through something like this. Most hockey teams play in a first-class arena and a world-class facility to work. The Islanders have none of that, which explains why they have struggled for decades.

The Islanders look forward to this day where they can play in an arena that they can be proud of for good. As great as the Coliseum was, the team never made much money there. It was a dump itself.

Long Islanders anticipate this Belmont arena would make Long Island and Belmont a better place with a nice transportation hub to boot.

Imagine going to the Belmont arena and experiencing the festive atmosphere once you enter the grounds of the arena or exit from the Long Island Rail Road. You can bet Islanders fans envision that by traveling to other arenas in the country and in Canada. I remember going to the Prudential Center where the Islanders played the Devils on Black Friday last season, and the Islanders fans filled up the Devils’ arena in droves. There was nothing like celebrating an Islanders win at Dino’s after the game in Newark. The type of home-ice advantage the Islanders need to be a Stanley Cup champion.

The Covid-19 pandemic delayed the construction of the new arena for a while but it’s up and running right now. Here’s hoping it opens up after next season. It can’t start soon enough. Playing at Barclays after next season would not be an ideal situation for the Islanders.

Hockey at Barclays Center serves as a cheap way for the Islanders to get by, but it’s not meant for a team to play there forever.

For the Islanders to play there next season, it’s an inconvenience. It seems cruel they have to go back there after basically disavowing that place when they agreed to play at the Coliseum next season.

Maybe someone can save the day by forking up the money to keep the Coliseum running, but what purpose would it serve for that investor when the Islanders are there for one more year?

The Islanders can only hope their new palace will come soon enough.

But with their luck, will it even happen?