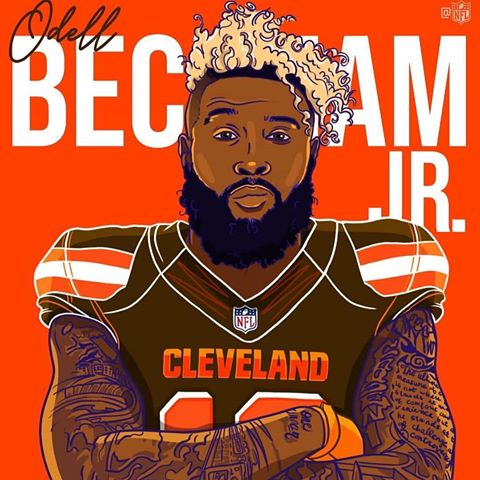 It was the trade that rocked the NFL world. We all know the news by now Odell Beckham Jr. has been traded from the Giants to the Browns. The Giants have received a first and third round picks as well as safety Jabrill Peppers when this trade happened. It created a mass frenzy in the NFL world. Giants fans were put into shock, then into rage, then into grief as the rest of the sports nation was laughing at us. We were told we’d been fleeced that we were stupid for doing it.

Many Giants fans are upset, confused, unsure asking why did this happen? What does it mean on the Giants end? Did we get robbed? It almost feels like a broken relationship with the Giants and their fans. For today, I want to be a friend to my fellow Giants fans. I’m a huge Giants fan and you may ask yourself what do I mean by being a friend? As in most breakups you usually turn to someone for solace but there are two types of friends. There’re ones that tell you what you want to hear, and those who will tell you the hard truth even if it makes you uncomfortable. The truth is this trade was good for BOTH parties. This might not be what you want to hear, and it may make you uncomfortable but I’m going to dive in this situation for all of you.

The first thing you may be asking yourself is why did this happen? Many of you probably listened to Dave Gettleman on Mike Francis’s show today, and he said this move was made for strictly “football reasons”. I’m here to tell you that’s not completely true. The Giants wanted out of the Odell Beckham show. They believed he was a distraction and that it could possibly get worse.

There are multiple reports about it from ESPN, SNY, Forbes. When Dave says it’s all about football, he’s just trying to blow out that distraction cloud that has been hovering over the franchise. This doesn’t mean that Odell is a cancer. He is a great guy. Teammates love him and he has become one of the most polarizing players in the game. He’s got the look, the skill, the personality and has reached a status that most football players can’t. He’s practically an NBA basketball player with his type of recognition. Don’t believe me? How many NFL players you see get a shoe deal like OBJ.

What also can be true is Odell loves the attention. He is a social media star. He is an entertainer with the pre-game one handed catches, the dancing in the endzone or on the sideline. He puts on a show, but just because your teammates like you doesn’t mean you aren’t a distraction. It doesn’t mean he didn’t have moments, where he took the air out of the room.

The question you might be asking is well if that’s true Frank why did they sign him? And my answer is simple. They tried to make it work. They knew the talent of Odell Beckham and they wanted to make it work. It was reported by Jay Glazer on Fox Sports, the man who predicted this months ago that the front office wanted to trade Odell Beckham before the big contract signing. The problem was coach Shurmur and ownership said no. They wanted to see if they can make it work so they signed him to a record-breaking contract. Even when a shady video came out involving a model and Odell with some potential compromising substance caught on camera, they signed him. It appeared to have gone downhill ever since.

A few weeks later before the ink could completely dry came the interview with ESPN and Josina Anderson. He did not tell the Giants about this interview. In that interview he threw his QB, and coaching staff under the bus for the recent team struggles. As maddening as it probably was for the franchise, I believe he would survive this. I didn’t think this was the nail to his coffin. We all know the list of other “incidents” that have occurred over his tenure, the sideline tantrums, the inopportune IV’s because he was dehydrated, and some questionable comments. All of them seem to be small infractions that were piling up.

There was something in that ESPN interview that really stuck out that not many people seem to focus on that was the most damning. It wasn’t that he threw Eli or his coaching staff under the bus but when he was asked if he was happy in New York and he said “”It’s a tough question,” “Obviously, I love seeing the sunshine all the time. I love, you know, I love being in L.A. I just like that atmosphere, but this is where I’m at.

This is the response after signing a record-breaking deal? This was not a spit on the quarterback or the coach, This was a spit in their owners face. You could survive throwing a co-worker under the bus maybe even a supervisor but when you insult the boss it’s hard to come back from that. Many of you praised him for being real and honest but ask yourself if any of you ever have done that or tried to do it in a public setting about where you work. I can assure you will be packing your bags that night. So, they signed him because they wanted to make it work and this interview followed by other incidents left the door open for the Giants thinking a new strategy. We have a lot of holes on our team and must get capital to fill those holes. To do this you have to give up an asset and Odell is the best asset they got.

Did they get proper value? Probably not. But when you’re looking to trade a player you usually never get proper value. What you’re looking for is 80 cents on the dollar instead of 50 and I believe the Giants did the best value they could. We have seen star receivers get traded before, Randy Moss got traded from the Vikings in his prime. The last question you be asking yourself is what’s next for the Giants? Dave Gettleman has made it clear he wants to change the philosophy to a run first offense. I know this comment caused the PFF wizards and the fantasy football experts to laugh and say we are going back into the Stone Age but there are some hard facts to the run first method. Four out of the top five rushing teams in the NFL made the playoffs including the two Super Bowl participants this past season. It’s not just about teams with the most rushing yards, it’s about rushing attempts as well. Eight of the top ten teams with the most rush attempts per game made the playoffs. The focus on running is an important aspect. When the weather gets bad, when defenses get better you must be able to run the football with success. On the flip side, three of the top ten teams with most passing attempts made the playoffs.

Running the ball helps with the play action passing game as well as controls time of possession which helps your defense. The best defense is the one watching from the sidelines. This is not some stone age mythology. This is still a reality in football. What this trade also did was made Saquan Barkley the face of the franchise and it opened the door for the next franchise quarterback to share in that spotlight.

Now I’m not going to lie to you and say the Giants are not at fault with the divorce from Odell but as I stated earlier it could be good for both parties. Odell could get a new start with a more competitive team and maybe less scrutiny in the media with all the attention that Odell gets. Maybe it’s not fair how he gets scrutinized for every little thing, but it comes with the territory of being a face of the league. Lebron James gets that same attention. That’s the double-edged sword about being an icon like LeBron. Now I’m not saying Odell has reached equal success that LeBron has but based on marketability and polarization they have similarities. It may not be fair but the little details that people scrutinize you for that’s comes with the territory. LeBron faces it.

For the Giants, it’s a way to start anew to create a new identity. I know we have seen star receivers get traded before. It wasn’t as ugly like AB and the Steelers or Randy Moss and the Vikings or T.O. and the Eagles but feelings fade sometimes and both sides were at fault. For us Giant fans, I know you have gone through your five stages of grief but it’s time to reach the final stage which is acceptance. I know it hurts now but deep down inside you know it was probably for the best.