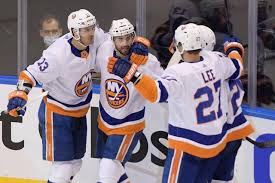 If the Washington Capitals did not know the Islanders are a Stanley Cup contender, they certainly know now. They saw it in person, and it wasn’t pretty.

The Capitals did all they could to rattle the Islanders from the start. They gooned it up to set the tone early. They suffocated the Islanders defensively. They managed to get power-play goals on Islanders’ penalties. They looked confident that they got this game for the first two periods.

Then everything changed in the third period.

The Islanders scored three unanswered goals in that period to earn a 4-2 victory over the Capitals on Wednesday afternoon after trailing 2-1 in the second intermission, drawing a 1-0 series lead in Game 1 of the Eastern Conference Quarterfinals.

Actually, go back to late in the second period when Jordan Eberle ripped a wrist shot through Capitals goaltender Braden Holtby after weaving his way towards the high slot, cutting the Capitals’ lead to 2-1. That’s where everything changed in that game. Momentum seemed to be on the Islanders’ way.

Call it a choke job by the Capitals. Call Holtby a sieve for that third period meltdown.

But a hockey wonk would do the Islanders a disservice by not crediting them for the way they responded in the third period after being pulverized good in the first two periods.

Mleczko knows what she is talking about, which makes her so good at her job. She knows the Islanders as well as anyone that covers the team. She knows this Islanders team won’t back down from anyone. It’s why she had a good inkling the Capitals and Holtby could melt down, and the Islanders would take advantage of it.

The Islanders proved their mettle once again. As frustrating as the game went for the first two periods, they never blinked. They knew they could make something out of it, and they did.

We keep saying this, and we will say it again: It’s a credit to the coaching staff and the players that the Islanders know how to win.

Still, a win like this should make the Islanders confident. Even if they lost this game, this series would not be doom and gloom because they have been resilient under Islanders coach Barry Trotz going back to last season.

It’s interesting experts are not giving the Islanders a chance to win the series. This shows no one knows much about this team to write them off. This is a good team that plays well defensively, and it showed in the first period when the Islanders killed off so many power plays that the refs awarded to the Capitals. Yes, T.J. Oshie scored those two power-play goals to give the Capitals a lead in the second period, but it could have been much worse considering the Capitals had three power-play opportunities in the first period, and they did not execute.

Maybe the Islanders changed some people’s mind with this win. If not, they don’t care. They are focused on winning playoff games to get caught up on what the critics think. The players believe in themselves, and their fans believe in them.

For the Islanders, it was just another day in the office where they know how to win the hard way by coming from behind after being dominated for the first two periods. They showed their championship mettle so well.

It’s a good bet the Capitals won’t be stupid enough to overlook their first round opponent or take it easy again after learning their lesson in Game 1. That’s if they even did it in the first place.

2 thoughts on “Islanders give Capitals something to think about”